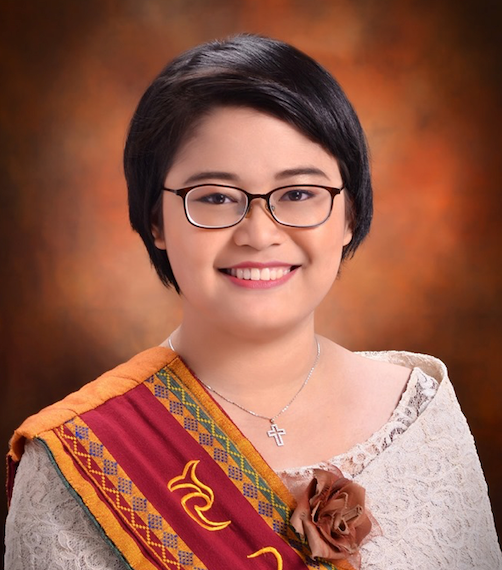 CEBU CITY, Philippines – Even an autoimmune disease cannot shake the faith of a UP student to earn her college degree.

Claire Obejas, who was diagnosed with systemic lupus erythematosus (SLE) in 2012, graduated with a degree of Bachelor of Arts in Psychology  at the University of the Philippines (UP) Cebu on Friday, June 28.

SLE or commonly known as lupus is an autoimmune disease in which the body’s immune system mistakenly attacks healthy tissue in many parts of the body.

Claire said that her family is from Ormoc City but she grew up in Cebu City after her mother, Clavel, was assigned in a private insurance company in Cebu City in 2015.

His father, Gabriel, together with his wife Clavel, is running a small souvenir business in Bohol after they retired last 2016.

In an interview with CDN Digital, 20-year-old Claire said that they found early symptoms of the disease when she was in high school.

“Nag start siya December 2011 when I felt pain sa ako feet while at school. Nisakit siya and I noticed mura siyag swollen. Ni grabe sad toh kay I used to play (though not religiously) soccer-baseball pag Intrams namo. We had my feet checked and it was juvenile rheumatoid-arthritis. It’s also autoimmune. Mao toh nagduda ako mom and sister nga basin lupus kay my cousin also has SLE. So we went to many doctors and eventually we were advised to visit my current doctor who treats lupus patients. Didto nahibaw-an nga lupus jud siya,” she said.

(It started last December 2011 when I felt pain in my feel while I was at school. My feet hurts and I noticed that it was swollen. It become worst especially because I used to play soccer-baseball every Intramurals in school. We had my feet checked, and it was juvenile rheumatoid-arthritis. It is also an autoimmune [disease]. Then my mom and sister suspected that it might be lupus because one of my cousins has SLE also. So we went to many doctors and eventually we were advised to visit my current doctor who treats lupus patients. We found out there that I have lupus.)

Claire told CDN Digital about her battles with the disease while continuing her studies in college for 4 years.

(Now, I am recovering from a major flare that almost killed me last year. That is hard with autoimmune illnesses, it is unpredictable and endless.)

(Last year, I thought I was relatively okay and managing the lupus then I found out that I have a hole in my stomach. Because of it, my kidney is affected, it is the most affected organ due to the lupus [infection]. I couldn’t walk because I had swollen feet with water and whole body also. Yet, I continued my studies and I am now getting better from it. My face is not really swollen now and I can walk properly.)

Despite her health issues, Claire continues to excel in school. In fact, she was a member of UP’s student publication and university’s creative writing organisation.

She was also an activist and part in different student organisations in the campus.

Growing up with an environment of perseverance made Claire strong enough to be inspired not to give up in her schooling.

“My tita is a cancer survivor. My paternal grandmother had to raise her own siblings at the young age of 14 because her parents left them. I basically grew up in an environment of perseverance. So in a way mura ko’g nagdako thinking nga wala man koy dili kaya buhaton.”

(My auntie is a cancer survivor. My paternal grandmother had to raise her own siblings at the young age of 14 because her parents left them. I basically grew up in an environment of perseverance. So in a way I grew up with a thinking, there is no such things that I cannot do)

Claire, who is the youngest of the three siblings, said that her parents, that she described as supportive and loving, also have significant impact of continuing her studies.

“They’re loving and very supportive especially about my interest in writing and journalism. They always provide the things I need and I always do my best to only ask for things I do need. Whenever I end up in the hospital ER for many reasons, they’re always there with me, along with my siblings,” she said.

Claire also said that she strived hard to continue her studies because she did not want it to be delayed and thankful that her college professors were considerate enough to allow her to be absent for her recovery last year.

Now, Claire is focusing on her review for the upcoming Psychometrician Licensure examination and also volunteering in a non-government organization by writing their radio reports.

Her advice to others like her, who are also faced with health-related issue, is “just have to look at the illness or problem in the eye and go, “You won’t bring me down.”/dbs