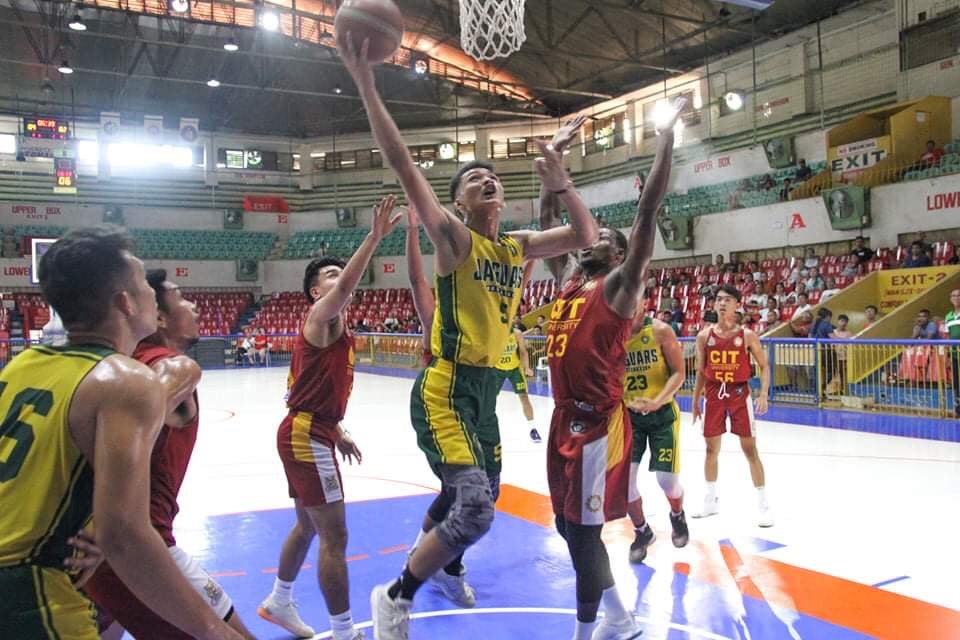 The USJ-R Jaguars get their first win in second round of the Cesafi Partner’s Cup in hard fought 72-67 victory against CIT-U Widcats on July 7 at the Cebu Coliseum. | Gerard Vincent Francisco

CEBU CITY, Philippines — The University of San Jose-Recoletos Jaguars kicked off their second round campaign with a 72-67 victory over the Tough Gear-Cebu Institute of Technology-University Wildcats in the 2019 Cesafi Partner’s Cup on Sunday, July 7, at the Cebu Coliseum.

The win pushed USJ-R’s win-loss record to 3-4. The victory did not come on a silver platter as the Jaguars had to tighten their defense in the third canto and held the Wildcats to just eight points to turn a 30-36 deficit into a 47-44 lead.

High-flying wingman Miguel Gastador, Foreign student-athlete Arnold Azangue and young guard John Kirk Gonzaga then carried USJ-R past the finish line as they combined to score 18 of the team’s 25 points in the final canto.

Gastador and Elmer Echavez led the Jaguars with 15 points each while Gonzaga finished with a tournament-high 13 markers. Azangue also helped out with his 11 points.

Meanwhile, in the high school division, the Hotel Fortuna-University of Cebu Baby Webmasters clobbered the University of Cebu-Lapu Lapu and Mandaue Campus, 73-48, to improve to 4-2. Dante Lapiz waxed hot in the second period, where he scored 12 of his team-high 16 points.

In the other high school match, the ARQ Builders-University of the Visayas Baby Lancers needed an extra five minutes to topple the hard-fighting University of Southern Philippines Foundation Baby Panthers, 87-84.

Albert Sacayan carried the fight for UV as he scored 28 points while Fritz Banzon added 22 markers./dbs