Kevin Durant to wear No. 7 with new team Brooklyn 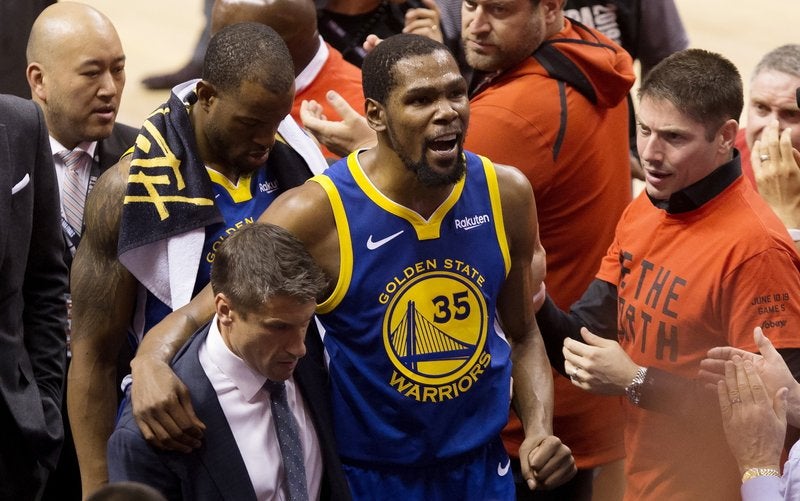 Kevin Durant walks off to the court injured in what became his last game with the Golden State Warriors in the NBA Finals against eventual champion Toronto. | AP file photo

LAS VEGAS — The deal bringing Kevin Durant to Brooklyn is official, and he’s changing his number along with his address.

The Nets completed a sign-and-trade with the Golden State Warriors on Sunday night (Monday morning, Philippine time), with Brooklyn landing Durant and a protected first-round pick in next year’s draft for D’Angelo Russell, Shabazz Napier and Treveon Graham.

Durant said last week he would sign a max deal with Brooklyn, which would be $141 million over four years, after three seasons with the Warriors. The rest of the deal was worked out over subsequent days, and the NBA signed off on the terms Sunday.

“Along with the rest of the league, our coaching staff has long admired Kevin’s incredible skill, resilience and tenacity,” Nets coach Kenny Atkinson said. “He has already established himself as a champion and one of the best players of all-time, and we couldn’t be more excited to welcome him into our program in Brooklyn.”

Durant isn’t expected to play at all next season while he recovers from an Achilles injury. When he does return to join a new-look Nets team that added Kyrie Irving as well this summer and officially signed him Sunday, he’ll wear No. 7 — after playing in No. 35 throughout his career.

Durant released a statement saying he wore 35 to honor someone “very near and dear” to him.

“But as I start this new chapter in my basketball life, the number I’ll be wearing on my back is the Number 7 next time you see me on the floor,” Durant said.

Durant is a perennial All-Star and two-time NBA champion after winning Finals MVP honors with the Warriors in 2017 and 2018. He’s a four-time scoring champion and his 22,940 points ranks third among active players. He missed most of this past season’s playoffs, first with a calf injury and then the Achilles rupture during the NBA Finals — a series Golden State lost to Toronto in six games.

“We’re thankful to Kevin for the incredible things he did for our team and franchise during his three years with the Warriors,” Golden State general manager Bob Myers said.

Russell got a $117 million, four-year contract from the Warriors. He was an All-Star for the first time last season, averaging 21.1 points, 3.9 rebounds, 7.0 assists and 1.2 steals per game.

“We’re excited to add a player of D’Angelo’s ability to our roster,” Myers said. “He’s coming off an All-Star season with the Nets and we feel, at the age of 23, his best basketball is certainly ahead of him in regards to his career trajectory.”

Another big free-agent deal got done Sunday when Utah completed the signing of forward Bojan Bogdanovic to a four-year, $73 million contract.

“We are very pleased to welcome Bojan and his family to our organization,” Jazz executive vice president of basketball operations Dennis Lindsey said. “His ability to play both ends of the floor in addition to his exceptional shooting will make him an integral contributor to our franchise and our postseason goals.”

Many other agreed-upon deals remain pending, such as Kawhi Leonard’s signing with the Los Angeles Clippers and the blockbuster trade that will see Paul George join him via a trade with the Oklahoma City Thunder.