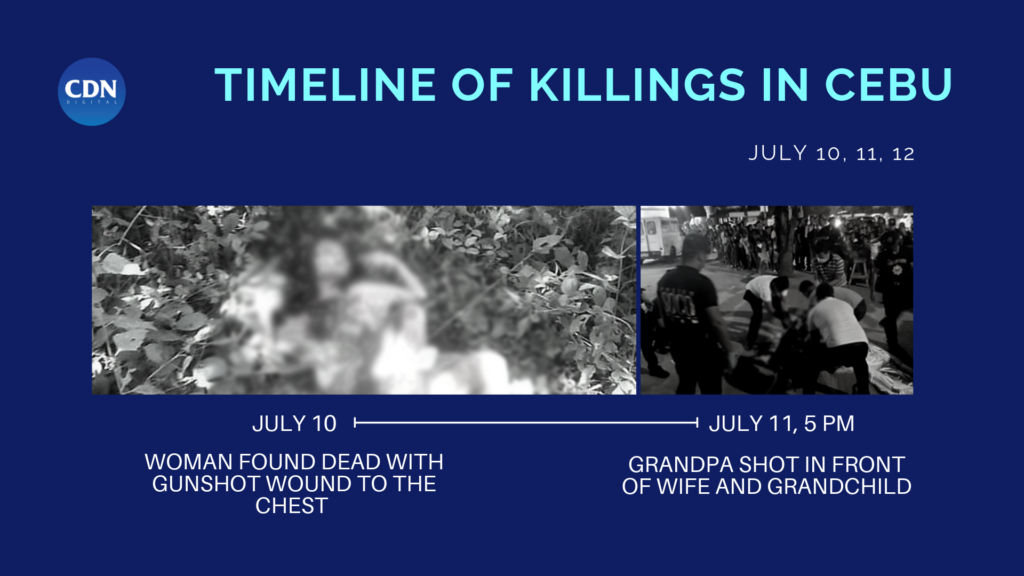 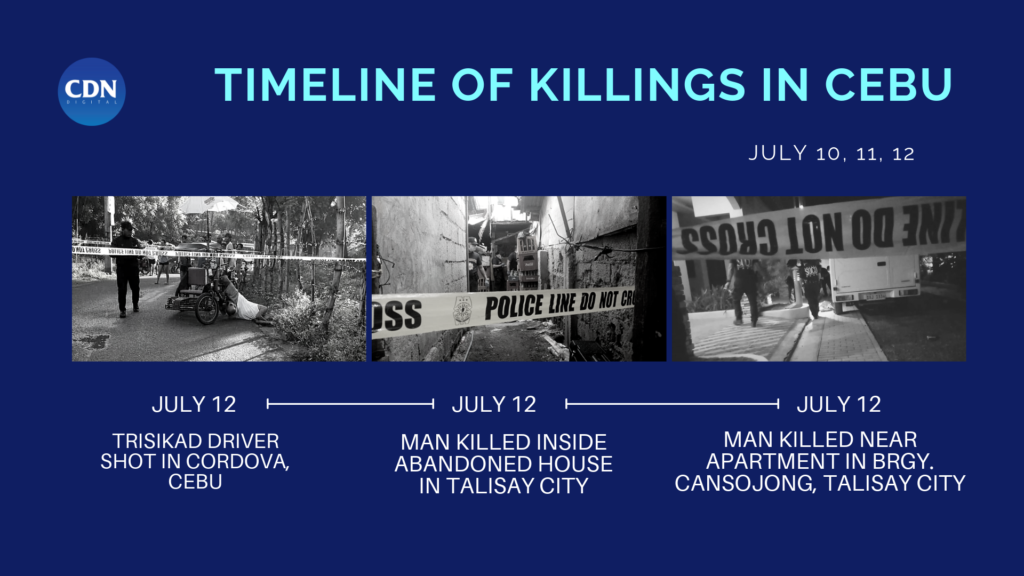 CEBU CITY, Philippines — It was a bloody week for Metro Cebu and its neighboring towns as five people were killed and two were wounded in six separate shooting incidents in three days.

The series of shootings started in the early morning of July 10, where a woman was shot dead by motorcycle-riding gunmen in Barangay Cuanos in the southern town of Minglanilla.

Police were still investigating the murder of Caballero.

Mejares died after he was shot in the chest about 50 meters away from the Mandaue Hall of Justice where he had just posted bail for an illegal gun possession case at past 5 p.m. on July 11 in Barangay Tipolo, Mandaue City, said Police Staff Sergeant Eracleo Cebuco of Mandaue Police Precinct 2.

The wife of Mejares told Cebuco that her husband even pleaded to the gunman not to shoot him but this was all in vain.

Early the next day on July 12 or about 12 hours from the Mandaue City shooting, motorcycle-riding assailants gunned down a trisikad driver in Barangay Pilipog, Cordova town in Mactan Island.

Cordova police said that they were investigating reports of the victim, Romeo Calunod, allegedly being linked to an alleged attack on another person 10 years ago.

However, police were still trying to verify the report and find out if it had any link to Calunod’s murder.

Eight hours later in Talisay City, a man, who helped facilitate driver’s license applications, was killed inside an abandoned house in Barangay Tangke.

Julius Engbino of Minglanilla town died after he was shot in the head by an unidentified gunman at past 1 p.m. of July 12, said Patrolman Dino Salazar of the Talisay Police Station.

Salazar said that the shooter was allegedly two men on a motorcycle that arrived in the area.

The backrider, allegedly, went in the interior portion of the barangay. A gunshot was heard and a man was seen hurriedly leaving the abandoned house and fled with his cohort, who was waiting at the street with the motorcycle.

Then six hours later at past 8 p.m. on July 12 in Colon Street in downtown Cebu City, an unidentified gunman, who was believed to be a thief or pickpocket, shot and wounded two persons — Froxiel Lumapa, a passenger jeepney dispatcher, and Pearl Dungog, a call center agent.

Police Staff Sergeant Eric Ardino of Carbon Police Station told CDN Digital in a phone interview that Lumapa, who had a graze wound in the left arm, said that he believed the gunman was the pickpocket, whom he earlier stopped from stealing from a passerby.

Ardino said that the unidentified gunman shot Lumapa hitting him in the arm but the bullet also hit Dungog, who was near Lumapa when he was attacked, in the left leg.

Both victims were brought to the hospital for treatment.

Then two hours later on the same day at past 10 p.m.  in Barangay Cansojong in Talisay City, a man was shot dead in front of the apartment that he rented.

Jeber Berbo of Barangay Lawaan in Talisay City died after he was shot several times by a man, who was Berbo’s visitor, said Police Major Orlando Carag, Talisay City Police chief, in an interview with CDN Digital.

A footage of one of the security cameras outside the apartment showed the visitor arguing with Berbo, but the actual shooting was not seen.

The footage showed a man running away from the apartment with a gun and hurriedly leaving the area on his motorcycle.

Carag said they believed the shooting was drug-related especially since there were illegal drug paraphernalia found on the table in one of the apartment rooms of the victim./dbs