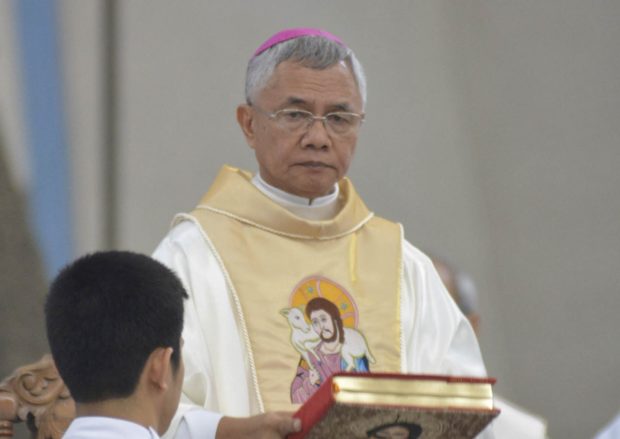 DISMAYED Bacolod Bishop Patricio Buzon said he thought the nation was “already moving toward a more humane civilization and society,” but he was dismayed at President Duterte’s call to restore capital punishment. —CHRISTIAN MANINGO/CEBUDAILYNEWS

MANILA, Philippines — The Catholic clergy on Tuesday led the opposition to the restoration of the death penalty being pushed anew by President Rodrigo Duterte, saying capital punishment did not deter crime and was a backward step in the quest for justice in a poor country like the Philippines.

In his State of the Nation address (Sona) on Monday, the President urged lawmakers to “act on all pending legislation to reimpose the death penalty,” especially for heinous drug-related crimes as well as plunder.

Bacolod Bishop Patricio Buzon was dismayed at the President’s call to restore the law on capital punishment, which was repealed in 2006 under then President Gloria Macapagal-Arroyo.

“I find that we are again retrogressing. I thought that we were already moving toward a more humane civilization and society,” Buzon said.

“Our stand is very clear. Even in the Church, we have already grown in maturity about understanding that issue. It’s sad. I think we are moving backward,” he added.

He said the claim that the death penalty was a crime deterrent was “more questionable” in a country saddled with poverty.

“It is prone to unjust sentences under the pretense of a still corrupt justice system, which our own President speaks of so often about,” Maralit said.

Ozamis Archbishop Martin Jumoad said the Catholic Church had been standing against the death penalty because there was always hope that offenders would change in prison.

“We believe in God’s grace to effect change in human life,” Jumoad said.

Sultan Maguid Maruhom, executive director of the Pagadian city-based group Ummah Fi Salam, said the death penalty was “very dangerous because our judicial system has not yet been reformed effectively.”

“There is fear that it will be exploited by the powerful and applied in a discriminatory manner … especially for the poor,” Maruhom said.

Restoring the death penalty, he added, also would violate international laws, particularly the International Covenant on Civil and Political Rights (ICCPR), to which the country is a party.

Arlyn Jawad Jumaoas, executive director of the nonprofit Save the Children from War in Basilan, said injustices would not be solved by capital punishment.

“Man’s justice will never be perfect, when you kill a person in error, you can never rectify your mistake,” said Jumaoas, whose father was killed by Muslim rebels.

Fr. Jerome Secillano, executive secretary of the permanent committee on public affairs of the Catholic Bishops’ Conference of the Philippines (CBCP), noted that the rampant killings in the antinarcotics campaign have not diminished the drug trade.

“The President himself admitted that it has remained unabated despite his unrelenting drug war,” Secillano said.

Instead of restoring the death penalty, Secillano said the government should “plug the holes in our criminal justice system, reform it and formulate approaches to solving the problem.”

“Provide the poor with livelihood or employment as viable alternative to dealing drugs; dismantle drug cartels; ensure that drugs won’t enter the country with the aid of government institutions; and strengthen the family,” he added.

The CBCP-Episcopal Commission on Prison Pastoral Care (ECPPC) appealed to legislators not to pass measures just to please the President.

“Don’t give our people an illusion and a quick fix ‘solution’ to our problems. They deserve something better,” said CBCP-ECPPC executive secretary Rodolfo Diamante.

The local rights group Karapatan, said the call for the reimposition of the death penalty showed the President’s “militarist, fascist and ineffective governance.”

The Commission on Human Rights (CHR) said it was firmly against reviving capital punishment since it would violate the Second Optional Protocol to the ICCPR and the Philippines’ commitment to “take all necessary measures to prevent any execution.”

CHR spokesperson Jacqueline de Guia said that instead of imposing the death penalty, the Duterte administration should focus on a “strong, responsive justice system that won’t allow perpetrators of crimes escape the long arm of the law.”

According to Eddie Villanueva, Jesus Is Lord Church founder and newly installed Deputy Speaker of the House, the death penalty is allowed in the Bible for heinous crimes, but he would not support it under the current state of the criminal justice system in the country.

“God understands we use wisdom in realizing that when the judicial system is bankrupt, the poor can’t hire top-caliber lawyers,and they are the only ones who get jailed even when the charges are based on fabricated, manufactured pieces of evidence,” said the evangelist and anticorruption Cibac representative.

Iligan City Rep. Frederick Siao expressed the same sentiment on the reimposition of the death penalty.

“We need a systems approach — a package of bills, with the death penalty on drug lords, syndicate bosses and protectors, as one of the crucial components,” Siao said.

He said there were “flaws” in the “pillars of our justice system”—law enforcement, prosecution, judiciary and penology.

Read Next
Gullas wants city-wide implementation of “No Parking” policy