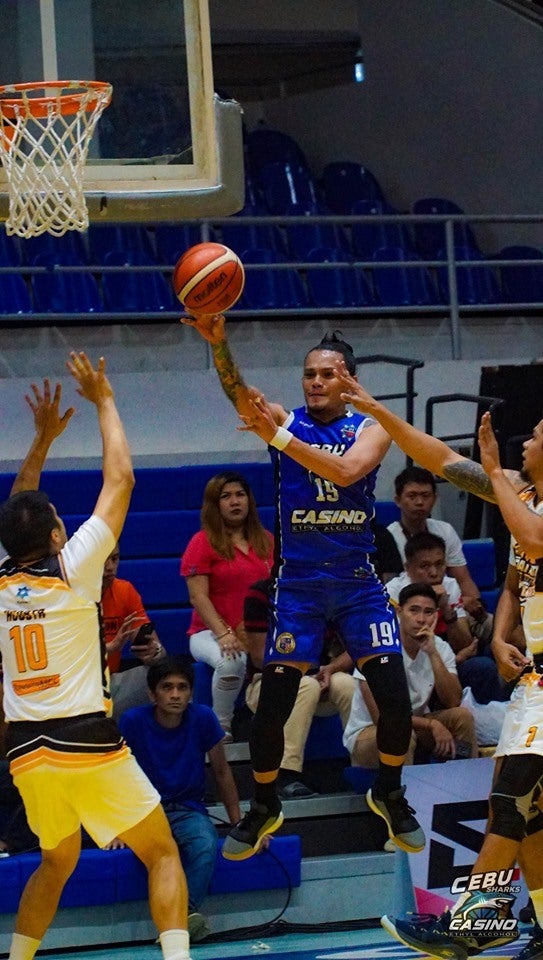 Patrick Cabahug scored 26 points to lead the Cebu Sharks in their victory against the Muntinlupa Cagers. | Cebu Sharks Photo

CEBU CITY, Philippines – The Cebu Sharks-Casino Ethyl Alcohol gave their home fans a lot to cheer about as they routed the visiting Muntinlupa Cagers, 79-62, in a hot and heated affair in the Maharlika Pilipinas Basketball League Lakan Season on Saturday night, August 10, at the Hoops Dome in Lapu-Lapu City.

With their best player, William McAloney, sitting the game out because of a fever and ace forward Rhaffy Octobre getting ejected late in the third canto, Patrick Jan Cabahug stepped up to the plate and delivered the goods as he scored 26 points on an efficient 10-of-17 clip, and hauled down seven rebounds while also dishing out two assists.

The win was a much-needed breath of fresh air for Cebu after losing their last two outings. The Sharks now own a 4-5 (win-loss) mark while Muntinlupa fell to 3-7.

Down seven, 34-41, at halftime, the Sharks came out of the dugout with fire in their eyes and uncorked a sizzling 24-3 surge anchored on the shotmaking of Cabahug, Harold Cortes and Octobre, whose layup gave Cebu a 59-46 lead.

Muntinlupa tried to stymie Cebu’s momentum with a minor scuffle with 2:18 left in that stretch that saw Cager forward Mark Guillen and Octobre got ejected from the game. Also slapped with unsportsmanlike fouls during that incident were Cebu’s Cabahug, Edrian Lao and Muntinlupa’s Raymond Maconcido.

Rather than fold, Cebu got further emboldened as the likes of Michael Cenita, Kraniel Villoria and Fletcher Galvez got in on the scoring act to bring their lead to as high as 21, 74-53, after a triple by the latter.

Lao finished with 12 points and five rebounds while Cortes and Octobre had nine markers apiece, the latter also producing 12 rebounds and three assists.

Cebu’s schedule gets tougher later this month as they next take on the reigning champions San Juan Knights on August 19 before facing off against last season’s runners-up, the Davao Occidental Tigers on the 29th. Both games will be at the Cuneta Astrodome in Pasay City. /dcb