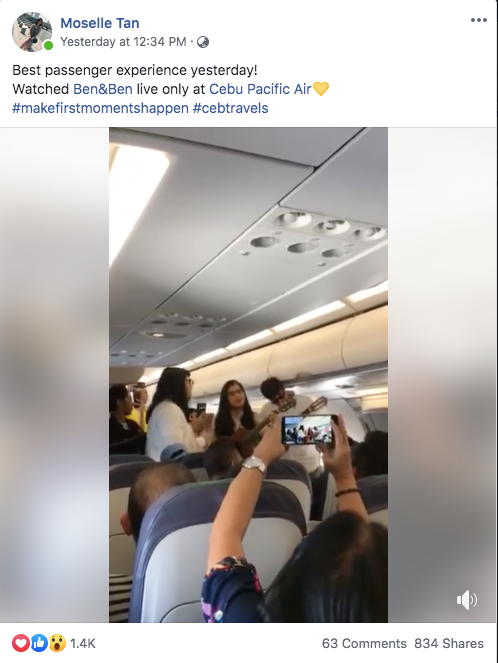 Screen shot from the video posted by Moselle Tan.

CEBU CITY, Philippines— What gets you by on board an aircraft?

Most of us would turn to music to ease the tension of flying.

Luckily, this flight from Manila to Davao had special guests on board to serenade for them live.

Moselle Tan, shared on her Facebook account last August 17, what seems to be the best passenger experience there is when the band, Ben&Ben, plays one of their songs, “Maybe the Night,” live on board.

35,000 FEET UP IN THE AIR: What would happen if a 9-person band suddenly stood up on the plane to sing to over a hundred passengers?It's a lucky flight for the passengers of 5J 953 as indie-folk band Ben&Ben sang their hit song "Maybe The Night" while en route to Davao from Manila for their "Limasawa Street" tour. (Video courtesy of Moselle Tan) #CDNDigital

(I was sleeping during the flight and I was awakened by Ben&Ben singing in front of me. Ha ha ha, I was surprised and did not know they would do this, actually.)

Read more: Ben&Ben loves to be in Cebu: ‘It’s like we have a place that we call home’

Tan, who also works as a cabin crew, was on her day off and was on her way home to Davao when all of a sudden she was in for this sweet surprise from Ben&Ben.

In the video, you can see how the people are enjoying the live performance of the band as they take out their phones and capture this very rare experience of being serenaded by one of the most talked-about indie-folk band.

Read Next
Pagasa: Brace for a cold, wet week ahead