Many of the early morning travellers expressed confusion while others were surprised to learn of the implementation of a new traffic scheme in the area, one of the busiest intersections in Mandaue City, starting at 5 a.m.

TEAM enforcer Ruel Malazarte said that they had to accommodate motorists query on the new traffic scheme while they also called the attention of those who continued to follow the old scheme that used to be implemented there.

The intersection of D.M. Cortes (formerly Plaridel Street) and UN Avenue is one of the busiest intersection in Mandaue City because it serves as gateway for those who are headed for and coming from the Mactan Cebu International Airport. It also provides access to travellers that are coming from or headed for the northern of the southern parts of Cebu province.

Under the new traffic scheme, vehicles coming from D.M. Cortes Street can no longer go straight to the Cansaga Bridge or make a left turn to U.N. Avenue on their way to the M.C. Briones Street (national highway).

(There were still those crossed the DM Cortes and UN Avenue intersection on their way to the Cansaga bridge and we had to call their attention.)

Southbound motorists coming from the Cansaga Bridge were no longer allowed to cross the intersection.  Instead they were directed to make a right turn to UN Avenue and then left turn to P. Burgos Street that is located near a mall in their area. P. Burgos Street provides access to A.C. Cortes Street and the Mandaue City North Reclamation Area. 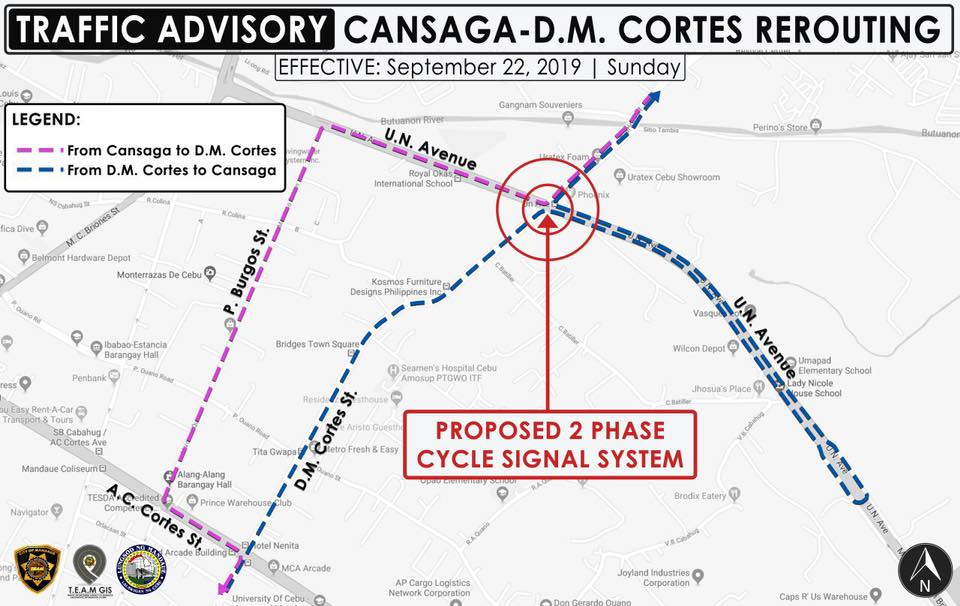 While motorists will not have to take a longer route with the implementation of the new traffic scheme, this is expected to facilitate the faster flow of traffic in the area, said Team Executive Director Florentino Nimor.

Nimor said they will continue to observe and assess the traffic situation at the intersection of DM Cortes and UN Avenue today to determine areas for improvements.

He said that while they implement the new traffic scheme, around 30 force multipliers were also deployed in nearby roads and intersections that may become chokepoints as as result of the traffic adjustment. /dcb