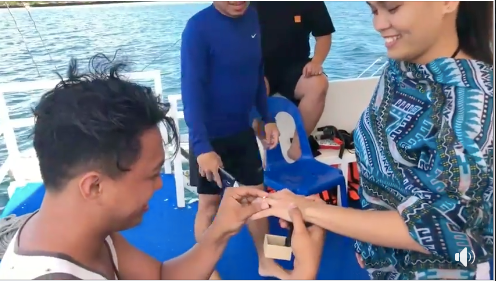 CEBU CITY, Philippines— There are many creative ways of asking for your partner’s hand in marriage.

While most tend to do it the traditional way,  there are also those who prefer to go out of their ways to make their wedding proposals something that is worth remembering.

A seaferer from Danao City in northern Cebu started his wedding proposal by playing the popular Pinoy Henyo game with his girlfriend of six years.

Kisha Tiffany Lagahid, 25, was clueless of what her boyfriend, Hugh Nathaniel Mendoza, 25 , had in mind.

“While I was still on board (working abroad), I was already thinking of ways on how to propose to her (Lagahid). I thought of doing a music video inspired by the song Rude, but then I realized that we can’t do some scenes because of restrictions with the locations,” says Mendoza.

Since he arrived in Cebu on September 5, Mendoza said that he had been thinking of other ways on how to propose to Lagahid, who works as an accounting staff in one of the company’s here, but he was “somewhat stuck.”  He just could not make a decision on how to go about his wedding proposal.

“Finally, I came up with a plan B with the help of my friends. So, the day came, October 20, we went island hopping and then I asked her to play (Pinoy Henyo) with me and then to her surprise, it was me asking for her hand in marriage,” says Mendoza.

His male friends, who acted as accomplices to his wedding proposal, had Lagahid’s eyes covered with a handkerchief just like in a typical Pinoy Henyo game.  He had the question “Will you marry me?” printed on a bond paper.

Mendoza asked Lagahid to make a wild guess of what was written on the bond paper.

When she finally opened her eyes, she read the very important question that needed her answer.   Mendoza was also kneeling behind her with a ring on his hand.

Shocked, Lagahid could not help but cry.

A video of the October 20 wedding proposal that was uploaded by Christian Leo Enriquez, one of Mendoza’s friends, on the same day already had 1.1 million views as of 10 a.m. today, October 29.

Mendoza said he was very happy that his wedding proposal was a success.

Asked how he knew that it was already the perfect time to ask for Kisha’s hand in marriage, Mendoza said: “I know it was the right time because I asked for the Lord’s guidance and He gave me an answer.”

Mendoza said that he is now looking forward to finally walking down the isle with the love of his life.  The couple has agreed to schedule their big day next year.

Congratulations to both of you on your wedding engagement! / dcb