Gastador on going up against imports: ‘I have faith and trust in myself’ 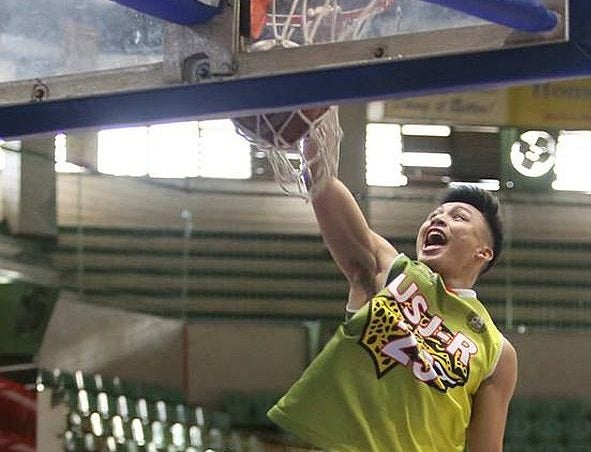 Miguel Gastador of the University of San Jose-Recoletos shows off one of his dunks in the slam dunk competition of the 2017 Cesafi All-Star weekend at the Cebu Coliseum. Gastador will once again contest the title in this year’s edition of the annual spectacle. | CDN file photo

But the 23-year-old University of San Jose-Recoletos (USJ-R) aerial acrobat and 2017 Cesafi dunk king said on Friday, November 1, 2019, that he is ready for the challenge ahead.

Gastador is one of just two local players competing in the annual spectacle of Cebu’s premier collegiate basketball league scheduled on November 10 at the Cebu Coliseum. The other is Cebu Institute of Technology-University’s John Jabonete.

The other contenders in the slam dunk competition are the foreign student athletes of the different teams in the Cesafi.

It’s going to be a toll order indeed for Gastador, who is trying to regain the title he lost last year to former UV Baby Lancer Popoy Actub.

(If I’m going up against imports, that would be better so that I will feel more challenged.)

(It’s going to be challenging but I have faith and trust in myself.)

Actub won’t be around to defend the title as he is already with the San Sebastian College-Recoletos in Manila, according to UV athletic director Dr. Chris Mejarito.

But Gastador will still be facing stiff competition against the imports.

(Whoever I will be up against, I am always ready.)

Meanwhile, Gastador hinted of something exciting he has prepared for this year’s contest.

“Expect something new and creative dunks this year,” he said.