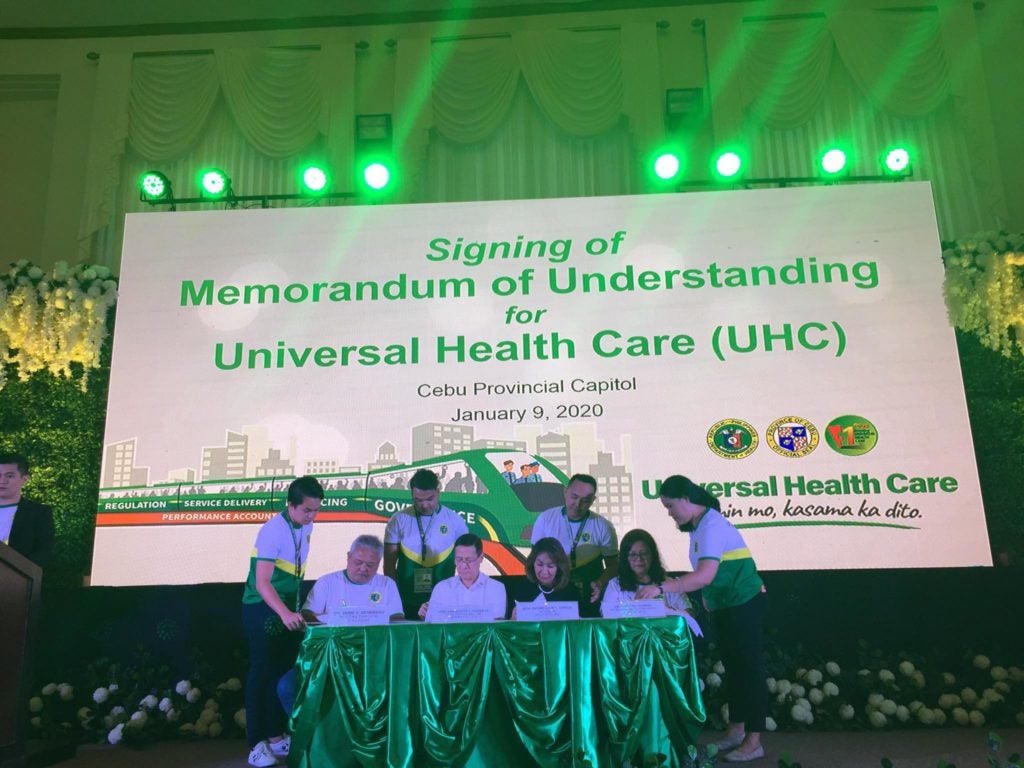 Governor Gwendolyn Garcia (third from left, sitting) pledges full support for the realization of the Universal Health Care Law in Cebu during the program’s launching at the Capitol Social Hall on January 9, 2020. | Rosalie O. Abatayo

CEBU CITY, Philippines — The implementation of the Universal Health Care (UHC) Law has officially started in Cebu on Thursday, January 9, 2020.

This is after Health Secretary Francisco Duque III and Governor Gwendolyn Garcia signed a memorandum of understanding following the official launch of the UHC implementation in the province.

But Duque, in a press conference after the launching at the Capitol, clarified that the implementation of the program would not be rolled out in one go but in a progressive manner.

Following the signing of the MOU, Duque said they would focus first on assessing and capacitating every level of the healthcare facilities in the province.

“You have the barangay health station which is the primary unit in delivering healthcare. Then you have the rural health units with a higher level, more human resources, and more diagnostic laboratory capacity and more health professionals manning the facilities,” Duque said.

Garcia, for her part,  said the design in implementing the UHC would fit the current setup of the province’s healthcare facilities.

The four provincial hospitals in Carcar City, Balamban, Danao City and Bogo City will cater to the RHUs and district hospitals in the south, west, north, and extreme north, respectively.

Capacitating each level of healthcare facilities, Duque added, would also decongest the higher level hospitals where the public would go to even for simple coughs and colds cases.

Duque said that if the primary health care facilities like the barangay health stations and rural health units would have enough medicine and personnel to address minor concerns, the cases would no longer have to be brought to the hospitals.

Meanwhile, Duque also clarified that even with the implementation of the UHC, not all services in government hospitals would be made free.

The official said that once a patient avails beyond the basic, such as occupying private rooms, he would have to pay for the excess amount of his bill himself./dbs