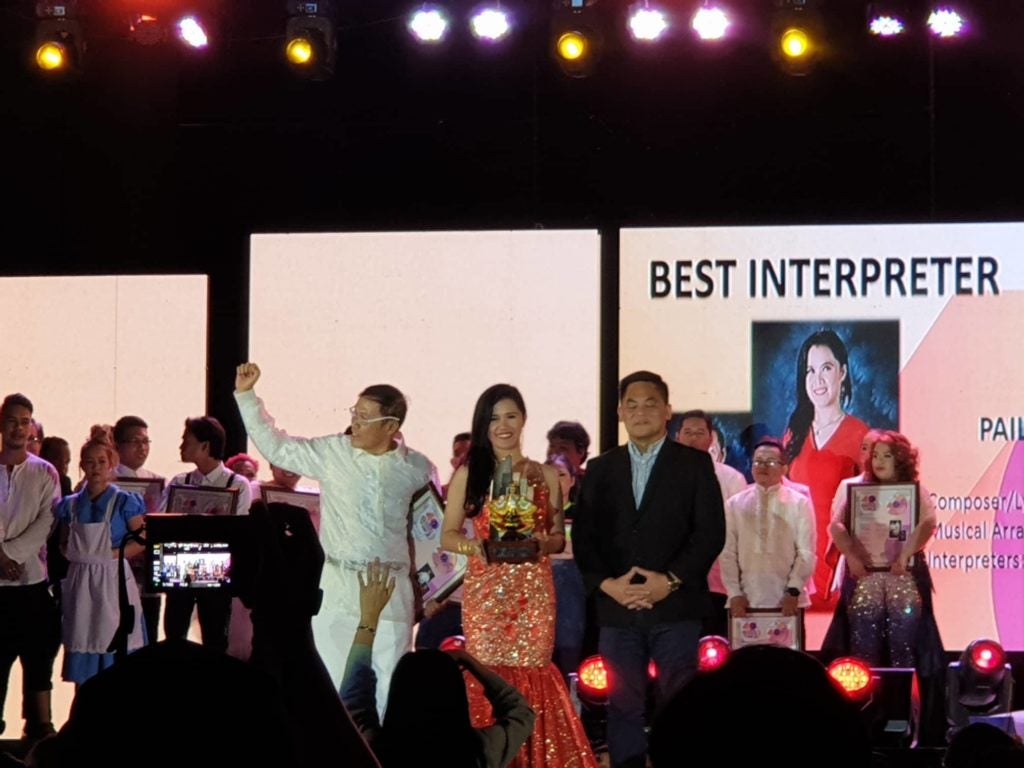 CEBU CITY, Philippines — The crowd at the 40th Cebu Popular Music Festival was treated to quite an unexpected performance by one of the contestants on Friday night, January 17, 2020.

Charmaine Monternel, who won as the Best Interpreter that night, performed on stage in a sparkling mermaid gown, and belted out the song “Pailob Lang”, complete with an Aegis-inspired singing style. For her final chorus, she threw her microphone up and caught it mid-air as she sang with finality, delivering an all-out performance that was met with cheers.

Charmaine is the daughter of literary writer and former journalist Fred Monternel.

According to Charmaine, her father started writing songs after retiring from journalism.

“I felt happy and excited because I gave justice to my father’s song,” she said.

The 30-year-old Charmaine shared that her family had always been musically-inclined.

Her brother, Edison Monternel, is the Tom Jones of Cebu, she said.

(My father also like music aside from being a literary writer.)

Charmaine worked as a performer in Dubai and in Beijing, China. In 2015, she entered as a contender in Tawag Ng Tanghalan, but was let off since she had to fly to Dubai for work.

Charmaine worked as a singer in Beijing, China, and flew back to the Philippines when her father asked her to interpret his song.

(I did not travel back because my father asked me to interpret his song. And I just waited for it to be done.)

She said that she had no idea yet when she would be back in China since the Cebu Pop Music Festival had just ended.

Charmaine interpreted the song “Pailob Lang,” which meant to be patient.

She described it as an “inspirational song.”

(Because after our failure, we can achieve success.)

(Her father wanted to inspire all that they would have patience if they would be faced with problems. Because after every failure, we can achieve success.)

Charmaine said that she did not expect to win “Best Interpreter” that night.

(I just wanted to give justice to my father’s song. I did not expect things would turn out that way.)

The Cebu Pop Music Festival was established by then Congressman Eduardo Gullas in 1980. Gullas also chairs the Cebu Arts Foundation, Inc, the group behind the longest-running singing-songwriting contest in the country./dbs