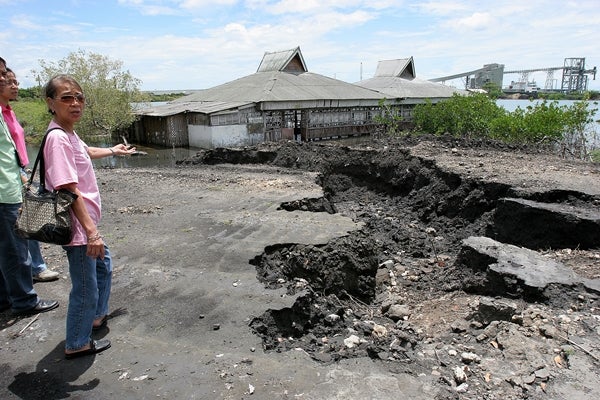 In this Sept. 2, 2009 photo, then Ombudsman Central Visayas Dir. Virginia Santiago inspect the Balili property, which was already being dumped with coal ash, with officials of the Department of Environment and Natural Resources. (CDN PHOTO/JUNJIE MENDOZA)

THE Cebu provincial government will no longer pursue the agreement to allow the dumping of coal ash in the controversial Balili property in barangay Tinaan in the City of Naga.

In last Monday’s regular session, the Cebu Provincial Board (PB) passed a resolution authorizing Gov. Hilario Davide III to terminate the 2009 agreement with Kepco-SPC which is operating a 200-megawatt coal-fired power plant in the City of Naga to dump their coal ash to the Balili property which is now the subject of a graft and corruption case involving former governor and currently 3rd district Rep. Gwendolyn Garcia.

“No more (deals). That is our agreement with them (Kepco SPC),” said Davide.
“With the end of the agreement, it follows that the Balili property will not be used as a dumpsite for coal ash,” he said in a phone interview.

The resolution sponsored by PB Member Grecilda “Gigi” Sanchez was unanimously approved.
“The Cebu provincial government and Kepco SPC have jointly determined that it would be beneficial for both parties to terminate the ash fill-related agreements and have Kepco pursue alternative ash disposal arrangements,” the resolution stated.

The Capitol and Kepco SPC came to a “mutual agreement” after representatives of the power company asked the provincial government to jointly terminate the contracts, said Provincial Legal Officer Orvi Ortega.

He said the Capitol will also receive U$500,000 or around P22 million for the agreement after Kepco SPC waived the deal’s initial payment in favor of the province.

“We met with lawyers from Kepco and agreed to their proposal but with one condition. They will waive the U$500,000 in favor of the provincial government and they said yes,” he told Cebu Daily News.

In May 2009, the province signed a MOA which allowed Kepco SPC to dump its coal ash in the Balili property for at least 25 years, subject to extension.

However, Kepco was not able to build a coal ash facility in the property since the deal was tied up in the courts following a complaint from ecology groups.

The Philippine Earth Justice Center (PEJC) filed a case questioning the environment safety of coal ash dumping in the Capitol property. Coal ash, waste by product of the coal used as fuel contains substances that may be harmful to the environment and human health.

Kepco was ordered to equip the facility with impermeable lining to prevent the seepage of hazardous substances to the soil and water aquifers.

Then, in 2012, the graft charges against Garcia and seven others were filed in the Sandiganbayan for the purchase of the 25-hectare property for P98.9 million, even if more 80 percent of the property is underwater and is classified as timberland.

Read Next
Sketch and Tell with Gil Maningo