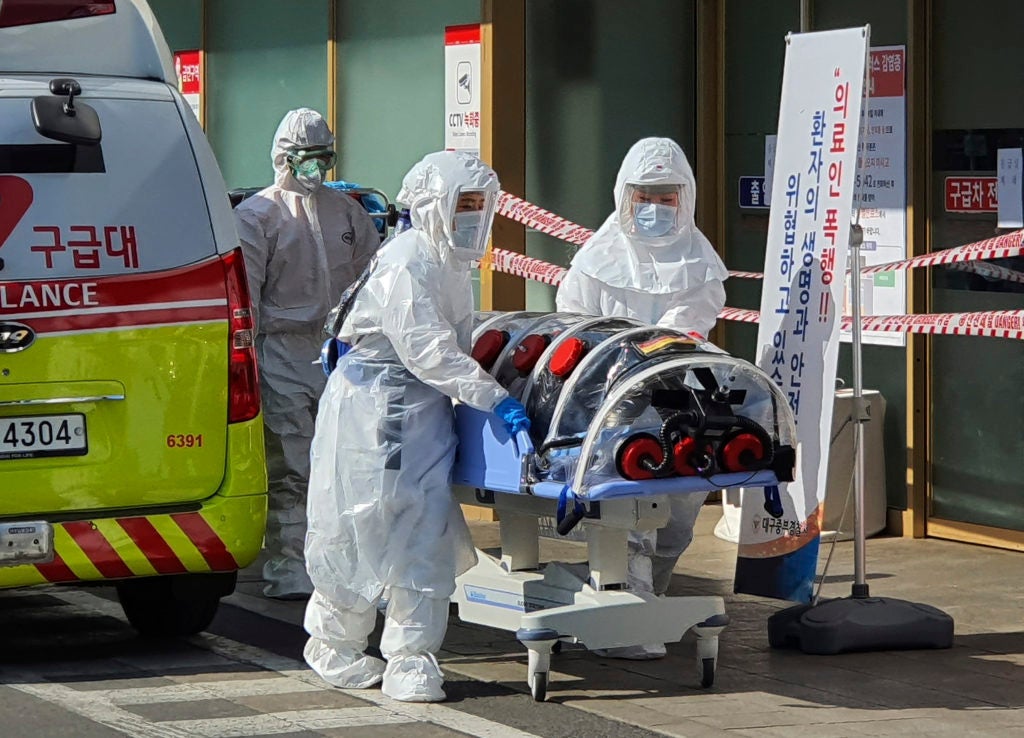 In this Wednesday, Feb. 19, 2020, photo, medial workers wearing protective gears move a patient suspected of contracting the new coronavirus from an ambulance to the Kyungpook National University Hospital in Daegu, South Korea. The mayor of the South Korean city of Daegu urged its 2.5 million people on Thursday, Feb. 20, to refrain from going outside as cases of a new virus spike. (Kim Jong-un/Yonhap via AP)

SEOUL, South Korea (AP) — South Korea reported its first death from the new virus on Thursday while the mayor of a southeastern city urged its 2.5 million people to stay inside as infections linked to a church congregation spiked.

The death was the ninth confirmed from the virus outside mainland China. Other deaths have occurred in France, Hong Kong, Japan, the Philippines and Taiwan.

The Korea Centers for Disease Control and Prevention said the South Korean man, believed to be about 63 years old, died at a hospital on Wednesday and posthumously tested positive for the virus. Officials said he had been hospitalized due to schizophrenia for an extended period and recently suffered pneumonia symptoms.

The center also confirmed 22 additional cases of the virus, raising the total in South Korea to 104.

Twenty-one of those new cases were in and around the city of Daegu, where the mayor urged citizens earlier Thursday to stay home and wear masks even indoors if possible.

In a televised news conference, Mayor Kwon Young-jin expressed fears that rising infections in the region will soon overwhelm the city’s health system and called for urgent help from the central government.

“National quarantine efforts that are currently focused on blocking the inflow of the virus (from China) and stemming its spread are inadequate for preventing the illness from circulating in local communities,” Kwon said.

The Korea Centers for Disease Control and Prevention said 49 of 73 new patients confirmed in the city’s region in the past two days went to services at a Daegu church attended by a previously confirmed virus patient or contacted her elsewhere. That patient is a South Korean woman in her early 60s who has no recent record of overseas travel, according to center officials. She tested positive for the virus on Tuesday.

The center’s director, Jung Eun-kyeong, told reporters that it’s still unclear whether she was a “super spreader” of the disease or merely the first patient detected in the area. Jung said officials were screening some 1,000 people who attended services at the Shincheonji Church of Jesus with the woman on Feb. 9 and Feb. 16 and were placing them under home isolation.

The church, which claims about 200,000 followers in South Korea, said it has closed all of its 74 sanctuaries around the nation and told followers to instead watch its worship services on YouTube. It said in a statement that health officials were disinfecting its church in Daegu and were tracing the woman’s contacts. The Daegu church has about 8,000 followers.

“We think it’s deeply regrettable … for causing concerns to the local community,” the statement said.

Shincheonji, which translates as “New heaven and new Earth,” is a controversial new religious movement established in 1984 by Lee Man-hee. The church describes him as an angel of Jesus sent to testify about the fulfilled prophecies of the Book of Revelation.

The explosion of infections in Daegu and the neighboring region, as well as some new cases in the Seoul metropolitan area where the sources of infection are unclear, have raised concern that health authorities are losing track of the virus as it spreads more broadly in the country.

Kwon spoke shortly before South Korea’s government acknowledged for the first time that the country was beginning to see “community transmission” of the illness, albeit at a “limited range.”

“We are seeing infections in some areas like Seoul and Daegu where it’s difficult to confirm the cause or routes of the infections,” Vice Health Minister Kim Gang-lip said, adding that the government would need to change its quarantine strategy that has focused on tracing contacts.

In a telephone conversation with Kwon later Thursday, President Moon Jae-in said the central government will provide all available assistance to help Daegu fight the virus, according to the presidential Blue House.

Separately, Moon also talked on the phone with Chinese President Xi Jinping to discuss cooperation in combating the virus. During the 30-minute call, they agreed to facilitate the sharing of information gained from infection treatments and strengthen cooperation between quarantine authorities, his office said.