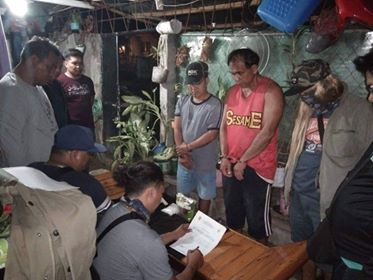 Two suspects are arrested with P8.7 million worth of suspected shabu in a drug bust in Cebu City pre-dawn on Saturday, Feb. 22, 2020. |CPPO Photo

CEBU CITY, Philippines — The drug personalities in Barangay Tangke, Talisay City in southern Cebu may have started to transfer their illegal drug operations to other areas in Cebu because of the “police lockdown” in the barangay.

Read more: Can Talisay cops cook up a ‘miracle’ to turn Tangke into a drug-free barangay?

Conag said James Peter Reyes Pastoriza was arrested after the more than a kilo of suspected shabu, which had an estimated Dangerous Drugs Board value of P8.7 million, was found in his possession.

Conag, who later learned that Pastoriza was from Barangay Tangke, Talisay City, said that he could have laid low in Cebu City due to the police presence and the strict police measures against illegal drugs implemented in Barangay Tangke.

Conag also described Pastoriza as an high value individual, who could allegedly dispose of 500 grams to a kilo of illegal drugs in a week.

He said that Pastoriza’s illegal activities were discovered after persons, who we are arrested for illegal drugs, during a Synchronized Enhanced Managing and Police Operations (SEMPO) last week, pointed to Pastoriza as the alleged distributor of illegal drugs.

Aside from Pastoriza, a 34-year-old man from Barangay Basak San Nicolas, was arrested during the buy-bust operation.

Conag said that Ricky Medil Pelida was caught with a gram of suspected shabu and was arrested together with Pastoriza.

He said that Pelida was believed to be an illegal drugs client of Pastoriza.

“When we got to the area, the dogs were noisy which might have tipped [Canton], and he escaped,” said Conag.

Pastoriza and Pelida were undergoing profiling and background checks by the policemen of the PIB and the CPPO.

Both were detained at the CPPO detention cell in Sudlon, Barangay Lahug, Cebu City, pending the filing of illegal drugs charges./dbs