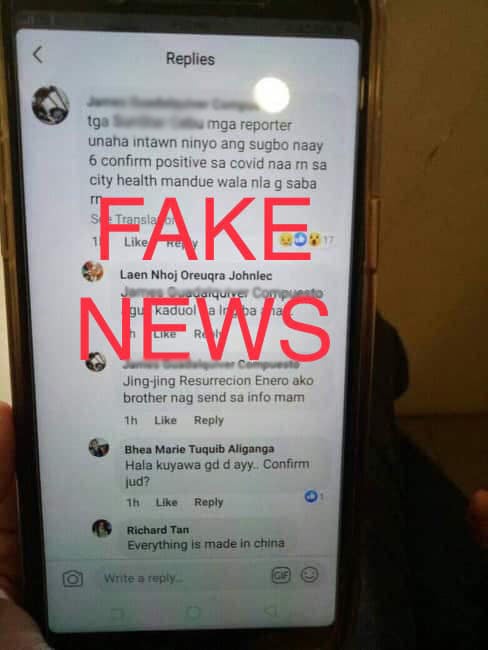 The Mandaue City government has tagged the information of postive COVID cases in the city as FAKE NEWS. | Photo from Mandaue City PIO

CEBU CITY, Philippines — The city government of Mandaue has tagged as “fake news” the information circulating on social media about six allegedly confirmed cases of the coronavirus disease (COVID-19) in the city.

In an advisory of the city’s Public Information Office, the city appealed to the public to stop spreading false information about the viral health threat as it may sow unnecessary panic.

Along with the advisory, the PIO uploaded a photo showing a comment of a netizen tagging a local media outlet  about the “confirmed” case.

(Put Cebu first. There are six confirmed cases of COVID-19 in Mandaue City Health but they are keeping it to themselves yet.)

The netizen further claimed that the information was sent to him by his brother.

CDN Digital tried to contact the netizen through Facebook messenger and has opted to withhold his name pending his reply.

“This is FAKE NEWS made to sow panic and fear among the public. Do not spread this fake information. FAKE NEWS spread faster than the virus,” the PIO.

Instead of fake news, the city called on the pubic to “spread positivity and correct information.”

A provincial ordinance is already in place in Cebu province penalizing those who spread false information regarding the COVID-19.

A person found spreading false information about the health threat may be fined up to P5,000 and/or face jail time of up to one year.

Read: Optometrist spreading fake info about COVID-19 to be charged

In February, a medical worker has been charged in court for allegedly spreading false claims about COVID-19 -positive patients in a hospital in Mandaue City.

Read Next
PBA cancels games due to coronavirus threat