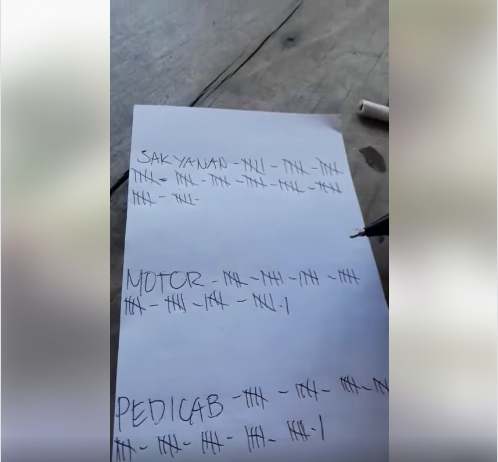 CEBU CITY, Philippines—What do you when you are bored?

This lad from Digos City in Davao del Sur found a creative way to kill time while community quarantine is being enforced in their area.

In the afternoon of March 19, Bradley Rivera, 19, decided to sit near their house gate and started to make a tally of the number of vehicles that were passing by.  He also did a video of his tally which he posted on his social media account.

He listed a total of 55 cars, 41 motorcycles, and 46 tricycles or locally known as a pedicab in a span of three hours.

Rivera said he never expected that his post would go viral.  All that he had in mind was to come up with an online comic relief that he could share with his friends, who like him are also trying to fight boredom.

Princess Mae Ann Natinga said, “tawo talion yay para maiba (I will be counting people who will be passing by for a change.)”

This video made by Rivera has brought laughter to several individuals who are suffering from boredom.

What do you have in mind?

There are a lot of things that we can still do at home while on community quarantine. / dcb

Read Next
House staff member under investigation for COVID-19 dies