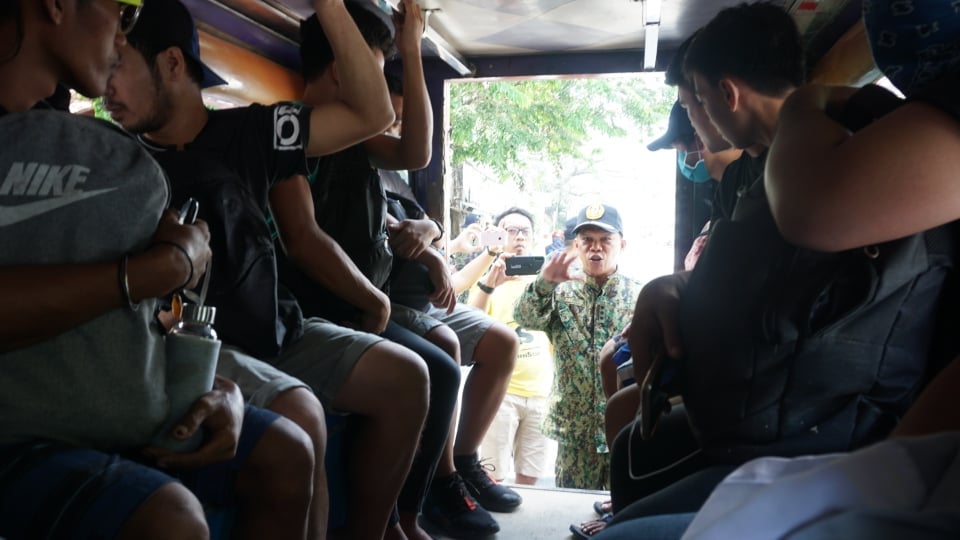 CEBU CITY, Philippines— Cebu City Police Director Police Colonel Hector Grijaldo Jr. was wandering the streets of Cebu City early Wednesday, March 25, 2020, to check for himself if the public continues to follow the government’s measures against the spread of the Coronavirus Disease 2019 (Covid-19).

Grijaldo told the members of the media in a phone conference that it was his initiative to conduct inspections along the stretch of Osmeńa Boulevard.

(It was my initiative to walk along the streets so I can see first hand the situation on the streets. We all know that mornings are very crucial, from 5 a.m. to 8 a.m. this is the time when people go to work, go to the market or to some making their way home.)

And to no surprise, Grijaldo called out some of the citizens whom he saw were not practicing the mandate of social distancing.

Read more: ‘Distancia Bai’ stickers to be put up in PUJs

Among those was a truckload of construction workers  clearly violating the mandate on social distancing.

(There’s one truck that is open to the public, where the passengers are staying too close with each other, there were roughly 30 people on board and there were only four chairs that were used.)

With this, Grijaldo suggested that employers provide vehicles to transport their employees as to not jeopardize their health.

(They are not prohibited to travel, they are also not prohibited to go to work, but it is the employer’s obligation to provide proper transportation to their workers so that they won’t violate the standard social distancing mandate.)

Grijaldo  said that it is not an excuse for employers to say that they do not have enough vehicles to transport their workers, even suggesting they can transport in batches.

(What’s important is all employees should be brought to work and should be taken home.)

Grijaldo encouraged those who have a complaint about their employers about this problem to report  to his office so they can work hand-in-hand with the city and to resolve the issue.

Grijaldo is now ordering his men to secure and put up big tarpaulins along the highways of the city that will remind the public to practice social distancing. /bmjo