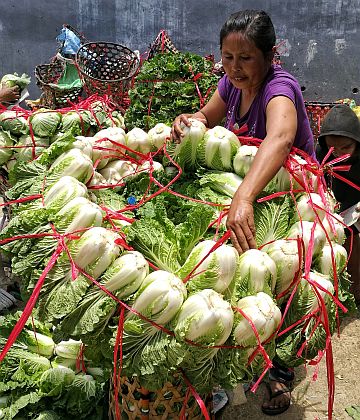 A vendor in Mantalongon, Dalaguete unpacking a basket of vegetables.
CDN FILE PHOTO

CEBU CITY, Philippines —Twenty towns belonging to the fourth and fifth class income classifications will be the first to roll out their Bagsakan Centers to retail affordable basic goods for their constituents during the enhanced community quarantine period.

Governor Gwendolyn Garcia said they have already identified the “poorest” towns to ensure that the constituents there will have a cheaper option for food and other basic needs while they are on ECQ.

Garcia said the province has already ordered 13,000 sacks of rice from the National Food Authority (NFA) which will be retailed utmost at P27.50 per kilo.

Garcia said she already signed a purchase request for canned goods that will also be sold at the bagsakan centers.

The governor said the province aims to sell the basic goods for a lower price than the current price ceiling that the Department of Trade and Industry has imposed on these items.

She also said that selling the products at a price that is affordable for the indigent people will be a way of helping them without snatching the sense of pride of being able to provide for themselves.

Garcia added that crops produced by local farmers will also be sold in the bagsakan centers to provide a source of income for them.
The local government units, Garcia said, will help farmers bring their produce to the bagsakan center in their town proper. /rcg
Your subscription could not be saved. Please try again.
Your subscription has been successful.
Read Next
Capitol downloads P373.2 M to LGUs for basic needs during ECQ