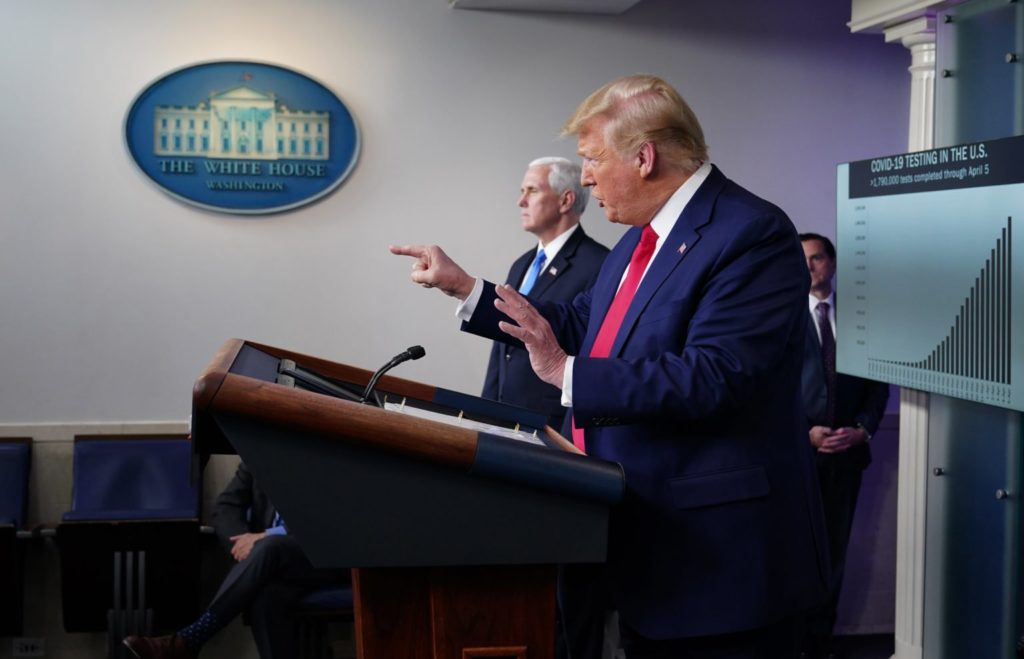 US President Donald Trump points to ABC News chief White House correspondent Jonathan Karl (off frame) during the daily briefing on the novel coronavirus, COVID-19, in the Brady Briefing Room at the White House on April 6, 2020, in Washington, DC. (Photo by MANDEL NGAN / AFP)

WASHINGTON — President Donald Trump threatened on Tuesday to cut US funding to the World Health Organization, accusing it of bias toward China, where the authorities lifted a two-and-a-half-month travel ban on Wuhan, the city that spawned the global coronavirus pandemic.

As the United States suffered a record total of nearly 2,000 deaths in the past 24 hours, China reported no new deaths for the first time since the outbreak began in Wuhan in late December.

British Prime Minister Boris Johnson remained in stable condition in intensive care in a London hospital, meanwhile, after being admitted on Monday, 10 days after being diagnosed with the virus.

His spokesman said the 55-year-old Conservative leader was in “good spirits,” was receiving “standard oxygen treatment” and has not required a ventilator.

The shocking hospitalization of a high-profile world leader underscored the global reach of COVID-19, which has put more than 4 billion people — over half of the planet — on some form of lockdown, upending societies and battering economies worldwide.

Amid warnings that worse is yet to come, death tolls mounted from the virus that has now claimed more than 82,000 lives and infected more than 1.4 million people worldwide.

In Washington, Trump told reporters that he was “going to put a very powerful hold” on funding to the WHO, the UN body whose biggest contributor is the U.S., accusing it of being “very biased towards China.”

“They called it wrong,” he said of a WHO travel warning on China. “They could have called it months earlier.”

Trump gave no details about how much money would be withheld and minutes later he said he would only “look at ending funding.”

China faces criticism over the way it handled the initial virus outbreak and Trump and others have expressed doubt over the accuracy of Chinese statistics for cases and deaths.

Trump himself has been widely criticized for initially downplaying the virus, which he likened to an ordinary flu before later accepting it was a national emergency.

More than 12,800 Americans have now died from COVID-19, according to Johns Hopkins University, and with nearly 400,000 cases the country has the most in the world.

A record total of 1,939 people died in the United States in the 24 hours up to Tuesday evening.

‘Eye of the storm’

China lifted a travel ban on Tuesday on residents of Wuhan and reported no new deaths, but the situation remained grim elsewhere.

While other major cities around the world remained locked down, thousands of people rushed to leave Wuhan.

Train service and flights resumed and roadblocks were removed, prompting an exodus by residents wearing protective clothing and masks.

China’s National Health Commission said Tuesday that no new deaths had been logged in the preceding 24 hours, the first fatality-free day since the country began publishing figures in January.

China’s official tally is some 81,000 overall infections and more than 3,300 deaths but there are suspicions Beijing has under-reported the real numbers.

New research showed Britain’s toll on a steeper trajectory than other nations and predicted as many as 66,000 deaths by July, far more than in Italy, which has the highest fatalities to date — 17,127.

But there were glimmers of hope in the statistics.

Spain said its downward trend in new infections and deaths was continuing and that increases in fatalities on Monday and Tuesday were the result of weekend deaths being tallied.

Eduardo Fernandez, a 39-year-old nurse at Madrid’s Infanta Sofia Hospital, said there had been fewer admissions in recent days.

“But we remain much above our usual capacity,” he cautioned. “I don’t know if my colleagues who are in the eye of the storm are able to see (the decrease) because the work pressure is very high.”

Iran’s parliament convened for the first time since late February as the country reported a drop in new infections for the seventh straight day.

In New York, the epicenter of the U.S. outbreak, Governor Andrew Cuomo said the state appeared be nearing the peak of its pandemic but urged New Yorkers to continue staying indoors.

“I know it’s hard but we have to keep doing it,” he said.

A New York City funeral home director, Pat Marmo, said he was dealing with three times more bodies than normal. “It’s almost like 9/11, going on for days and days and days,” he said.

Despite stay-at-home orders, voters in another U.S. state, Wisconsin, went to the polls to cast ballots in the Democratic presidential primary and local elections.

The Milwaukee Journal-Sentinel showed a mask-wearing woman in line to vote holding a sign bearing the message: “THIS IS RIDICULOUS.”

Governments are scrambling to put together rescue packages to stem the economic damage from effectively shutting down global commerce, as fears loom of a devastating recession.

The UN’s International Labor Organization said 81 percent of the global workforce of 3.3 billion people are now affected by “the worst global crisis since the Second World War.”

Japan, which declared a month-long state of emergency on Tuesday, has promised a $1-trillion stimulus package and Trump said he favors another massive U.S. spending program, this time targeting infrastructure projects.

EU finance ministers were working on a deal to use the eurozone’s 410-billion-euro ($447 billion) bailout fund to fight the virus but the bloc remains divided on pooling debt to issue “coronabonds.”

Stock markets were up across Asia and Europe but Wall Street finished slightly lower.

The EU announced it would put up 15 billion euros to help developing countries fight the epidemic, which is only starting to spread in some of the world’s poorest countries.