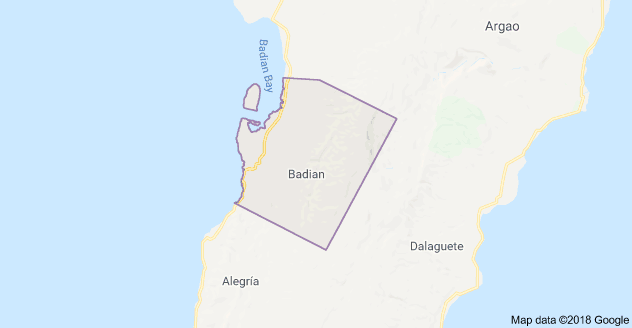 CEBU CITY, Philippines – The Municipal Health Office of Badian town in southwestern Cebu debunked reports that some of their residents fled to Negros Oriental, and allegedly flocked to hospitals there.

Dr. Urduja Espiritu, the municipal health officer of Badian, slammed these allegations in a statement she issued on Thursday, April 9, 2020.

“I want to let everybody know that there is no truth to this news,” Espiritu said.

The health officer is referring to a story published by Inquirer.net on April 3, 2020, alleging several “sick” individuals from Badian migrated to Negros Oriental.

“Badian is not a town of sick people. If anybody gets sick here, we can handle and take care of them properly to higher centers if needed. There is no reason for them to cross over to Negros,” said Espiritu.

The town officer clarified that some of those who crossed the Tañon Strait are residents from Negros who were staying in Badian and wanted to return to their hometowns.

Tañon Strait is the body of water separating the islands of Cebu and Negros.

“The truth of the matter is that there was a group of ‘healthy’ people (not sick), who crossed over to Negros. But actually they are residents of Negros who were in Badian. They hired a motorboat to bring them back to Negros before the lockdown of Cebu province,” said Espiritu.

Badian is a third-class municipality located approximately 100 kilometers southwest of Cebu City. It faces the towns of Ayungon and Tayasan of Negros Oriental.

She added that a ‘stubborn’ couple also went to Negros Oriental despite the Enhanced Community Quarantine in effect.

“All of these people became PUMs (persons under monitoring) and not PUIs (patients under investigation) as stated in the news, because they are not sick. They didn’t have any illnesses,” Espiritu said.

Both Cebu and Negros Oriental belong to Central Visayas and as of April 8, 2020, cases of coronavirus disease 2019 (COVID-19) in the region remained at 36, with eight deaths.

Recoveries, on the other hand, has increased to 19. /bmjo