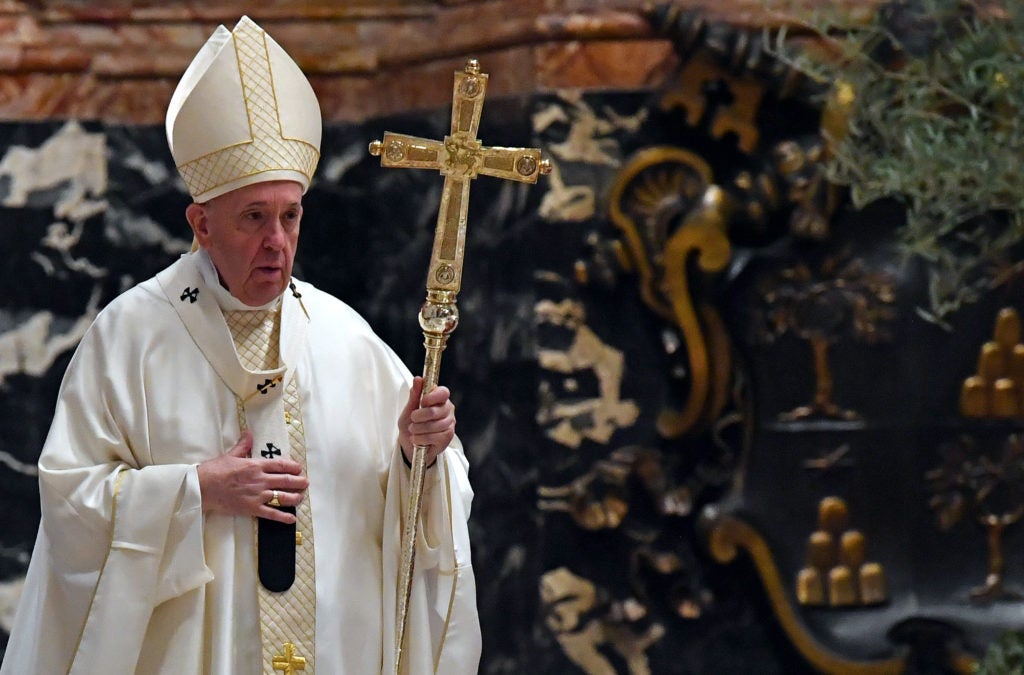 Pope Francis leads the “In Coena Domini” Mass of the Lord’s Supper of Maundy Thursday, commemorating the Last Supper of Jesus with his disciples and inaugurating the Easter triduum, on April 9, 2020 behind closed doors at St. Peter’s basilica in the Vatican, during the lockdown aimed at curbing the spread of the COVID-19 infection, caused by the novel coronavirus. (Photo by ALESSANDRO DI MEO / POOL / AFP)

VATICAN CITY—Church doors will be shut and the Vatican sealed off when Pope Francis leads 1.3 billion Catholics in Easter Sunday celebrations held under a worldwide coronavirus lockdown.

Fear and confusion in the face of a disease whose toll has unrelentingly climbed towards 100,000 are reshaping society and transforming the way religion is observed.

Even such hallowed traditions as the pope‘s messages to the faithful on Saint Peter’s Square are being replaced by livestreamed prayers that Francis reluctantly records from the seclusion of his private library.

The Vatican has been closed to visitors for a month and the 83-year-old pontiff — beloved for breaking stuffy customs and mingling with the people — has complained of feeling “caged”.

“We have to respond to our confinement with all our creativity,” Francis said in an interview published by several Catholic newspapers this week.

“We can either get depressed and alienated… or we can get creative.”

The pope‘s virtual prayers are just the starkest example of religious improvisation in the age of social distancing and confinement.

Others abound worldwide — from the Archbishop of Panama blessing his tiny Central American nation from the air in a helicopter to the faithful in Spain blasting religious music from their balconies during Holy Week.

The scale of the unfolding tragedy has seen a New York City cathedral replace rows of wooden seats with hospital beds in case of overcrowding in surrounding emergency wards.

The powerful Catholic Church in the Philippines is urging the faithful not to kiss the cross and its Orthodox counterpart in Greece is planning to hold mass behind closed doors for its Easter on April 19.

“That’s not happening this year.”

Jews across the world did their best by using Zoom or other video conferencing apps to “seder-in-place” when the eight-day Passover holiday kicked off on Wednesday evening.

Westminster Abbey in London is following the technological trend by releasing Easter podcasts for the faithful of the Anglican Church.

Prince Charles — the heir to the British throne who was briefly quarantined last month after testing positive for the virus — recorded a reading of the Gospel for Easter Sunday.

And priests at France’s Roman Catholic shrine in the southwestern town of Lourdes began relaying nine consecutive days of prayers on Sunday by Facebook Live and YouTube.

“Since the pilgrims can no longer come to us, we invite ourselves into their homes,” Sanctuary of Lourdes rector Olivier Ribadeau Dumas said.

The pope himself previously observed Holy Thursday service marking Christ’s last supper — most famously depicted by Leonardo da Vinci in a mural housed in Milan — by washing the feet of 12 inmates on the outskirts of Rome.

The virus has now made this impossible.

Francis instead said a prayer for the dozens of priests and health workers who have died across Italy while attending to the sick since the outbreak began in the Mediterranean country’s north in February.

“They are the saints next door, the priests who gave their lives by serving,” Francis said.

The Argentine-born pontiff has reportedly been tested twice for COVID-19 since coming down with a cold at the end of February.

He has enjoyed a life of good health despite losing part of a lung as a young man and suffering from sciatica — a nerve condition that causes pain in his hip.

Francis told the Catholic newspapers that people across the world can try to spiritually escape their confinement through introspection.

“So: to be in lockdown, but yearning, with that memory that yearns and begets hope,” the pope said.

“This is what will help us escape our confinement.”

Read Next
These historical Cebu churches stay remarkable over time