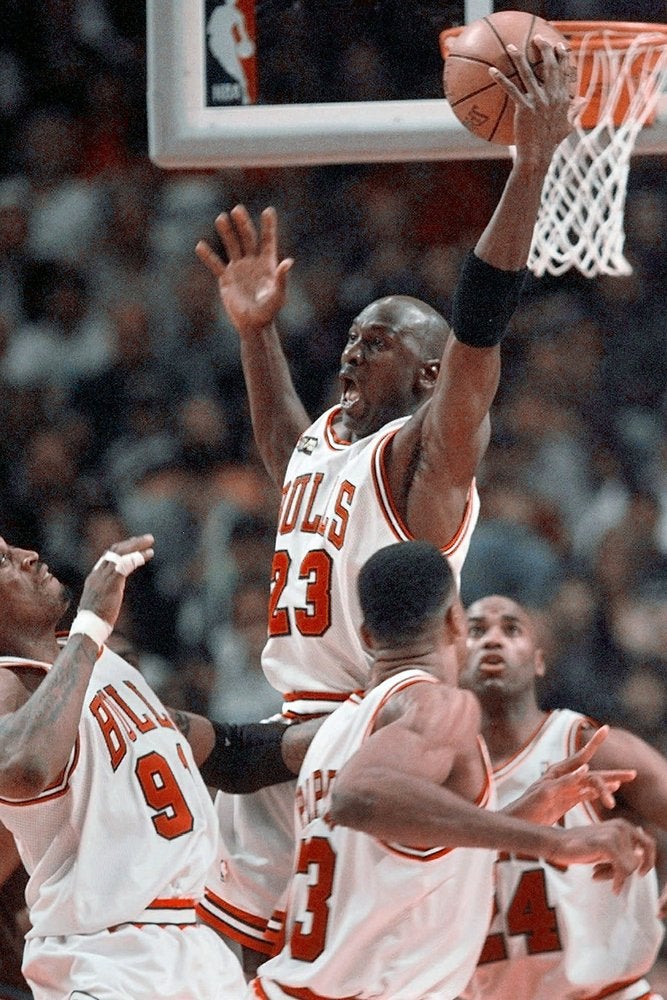 FILE – In this June 10, 1998, file photo, Cicago Bulls’ Michael Jordan reaches high above teammates Dennis Rodman, left, Scottie Pippen, and Scott Burrell (24) for a rebound against the Utah Jazz in the second half of Game 4 in the NBA Finals in Chicago. Jordan described his final NBA championship season with the Chicago Bulls as a “trying year.” “We were all trying to enjoy that year knowing it was coming to an end,” Jordan told Good Morning America on Thursday, April 16, 2020. (AP Photo/Michael S. Green, File)

“We were all trying to enjoy that year knowing it was coming to an end,” Jordan told Good Morning America on Thursday. Jordan appeared on the show via video conference from his home in Florida to promote the “The Last Dance,” a 10-part documentary series focused on the final year of the 90′s Bulls dynasty that won six NBA titles in eight years.

“The beginning of the season, it started when (general manager) Jerry Krause told (coach) Phil Jackson that he could go 82-0 and he would never get a chance to come back,” Jordan said. “Knowing that I had married myself to him, and if he wasn’t going to be the coach, then obviously I wasn’t going to play. So Phil started off the season saying this was the last dance — and we played it that way.”

The series will debut Sunday night on ESPN in the United States and on Netflix internationally over five consecutive Sundays through May 17. There will be two hour-long episodes each of those nights.

Jordan said Thursday that after Jackson told the team it was to be the final season together, the Bulls focused on completing the task of a second three-peat.

“Mentally it tugged at you that this had to come to an end, but it also centered our focus to making sure we ended it right,” Jordan said. “As sad as it sounded at the beginning of the year, we tried to rejoice and enjoy the year and finish it off the right way.”

The documentary was originally scheduled to be released in June during the NBA Finals, but ESPN made the decision to accelerate its release due to the lack of live sports programming because of the coronavirus pandemic. The series has been billed to include never-before-seen footage from that season, during which the team chased its sixth championship.

But the documentary covers more than just the final season.

The documentary shows Bulls owner Jerry Reinsdorf and Jordan arguing about a foot injury he suffered during his second NBA season.

Jordan wanted to play through the injury after doctors told the team there was a 90% chance he would recover.

Reinsdorf, however, did not want the star guard to play for fear it might ruin his career.

“I said to Michael, you’re not thinking about the risk-reward ratio,” Reinsforf said in the clip aired by GMA. “If you had a terrible headache and I gave you a bottle of pills and nine of the pills would cure you and one of the pills would kill you, would you take a pill?”

Jordan replied that “it depends on how (expletive) bad the headache is.”

Reinsdorf ultimately won out; Jordan sat out 64 games that season before returning for the playoffs.

Jordan also talks about his time at the University of North Carolina where he would write his mother asking for money for postage stamps so he could send her letters and to pay his phone bill.

“It’s a little different today,” Jordan said. “I had a phone bill in college that was $60 or less, but I only had $20 in my account. The thing that people will learn, and my kids will laugh about when they see it, is we used postage stamps back in those days. Looking at the video you will see things that people have forgot, that life was this way.

“We didn’t have Instagram or Twitter, so you had to live life as it came. … Spending time with friends and family, it wasn’t the phone. It was in presence — and you wrote letters.”

Jordan discussed his parents during the interview with Good Morning America, saying they were the biggest influence in his life. He said he learned many valuable lessons from them, including the ability to learn from the negatives in life and turn them into positives.

“I wouldn’t be here if it wasn’t for my brother Larry,” Jordan said. “Larry pushed me. We used to fight after every game. But through that fight emerged someone like me. He’s right next to me and supports me.”

The series will also include extensive profiles of Jackson, and some of Jordan’s key teammates, including Scottie Pippen, Dennis Rodman and Steve Kerr.