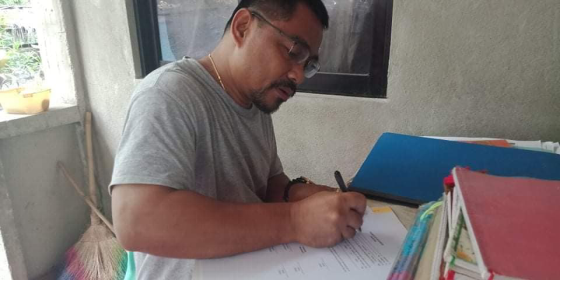 Vicente Fernandez, a UCT Listahanan beneficiary from Samboan, Cebu, signed a waiver indicating that he would no longer want to receive the subsidy and to give his slot to others.

He said that there were other people who were more deserving to receive the subsidy than him.

“I have seen in my eyes the situation of my fellow Samboanons who are in dire need especially in this trying times and that is why I am waiving this assistance so that it will be given to others,” Fernandez said.

Meanwhile, a UCT Listahanan beneficiary from Pamplona, Negros Oriental returned the P6,000.00 emergency cash subsidy after the recent pay-out held in their town.

(My father Cesario Zerna has received the P6,000 aid but we will return this so that those who need this cash aid more than us would receive it.)

Zerna, a retired midwife, said that she still had the capacity to support her father.

Read more: DSWD SLP beneficiaries paying it forward in this time of crisis

Elisa’s daughter, Maribel, a solo parent, was among those who received the cash subsidy during the recent pay-out in their town.

For Elisa, it was already a duplication of the cash subsidy because Maribel is a member of her family and they are already part of the SAP as a 4Ps beneficiary.

She personally returned the money to the Basay Municipal Treasure’s Office on April 23, 2020.

A tricyle driver in Tagbilaran City, Bohol named Marjune Melo informed the City Government of Tagbilaran that he would no longer receive the emergency cash subsidy because his wife was also included as a SAP beneficiary in their hometown in Lila.

(I did not know that my wife was included in the cash assistance in Lilo so when I learned about it, I personally came here to return the money so that we could not receive a double assistance and that this money would be given to those who needed the assistance.

Under Republic Act (RA) No. 11469 or the “Bayanihan to Heal as One” Act, target beneficiaries of the SAP are low-income families or those on subsistence economy or workers in the informal economy including 4Ps household beneficiaries and UCT Listahanan beneficiaries, and with members belonging to the vulnerable sector, assessed to be the most affected by the declaration given their existing life situations or circumstances.

Read more: LOOK: Bayanihan to Heal as One Act signed by Duterte

The Department emphasized that the government wants to help all families affected by the crisis to receive the social amelioration programs but priority will be given to the poor and those at risk of not earning income during this quarantine period./dbs