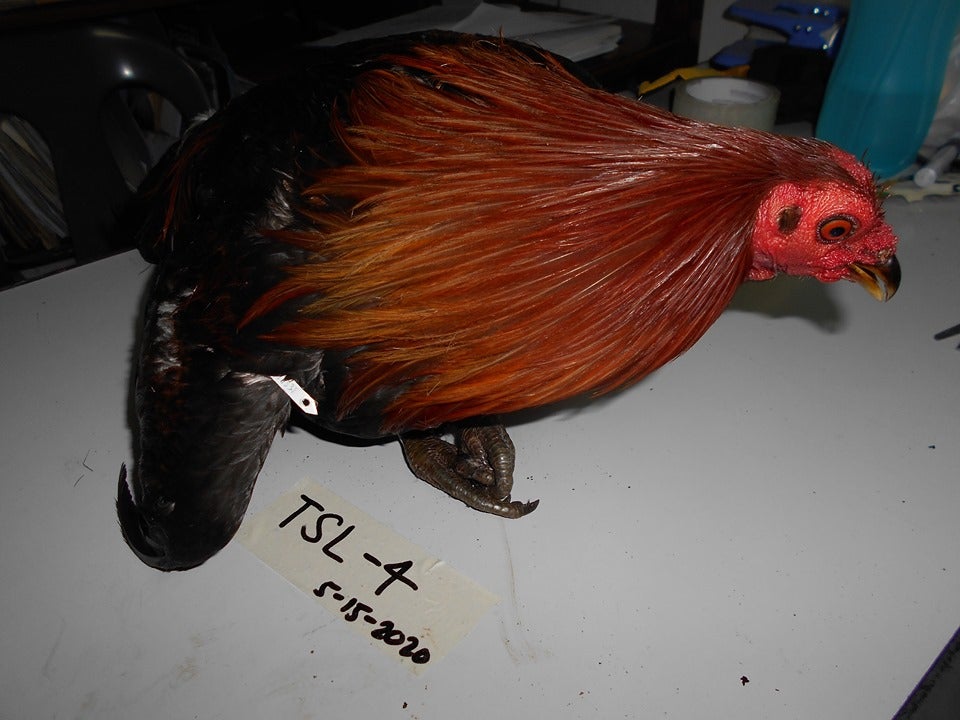 Police confiscated a fighting cock during their operation against an illegal cockfight in Balamban town on Friday. | Contributed Photo

CEBU CITY, Philippines –Five men from Balamban town in midwestern Cebu were jailed for joining an illegal cockfight that was said to have been organized by Lamesa barangay captain Wilfredo Alvarado.

However, Alvarado managed to elude arrest.

Still, Alvarado will be included as among the respondents of the illegal gambling and enhanced community quarantine (ECQ) violation charges that they will be filing in court on Monday, said Police Major Christian Torres, the chief of Balamban Police Station.

Friday’s operation now brings to a total of 30 the number of individuals who were arrested for joining illegal cockfights, a violation of the social distancing policy under the ECQ.

Torres said they coordinated with the Regional Special Operations Group of Police Regional Office in Central Visayas (PRO-7) after they received information on the illegal cockfighting in Barangay Lamesa that was celebrating its annual feast on Friday, May 15, 2020.

But, they only managed to collar five men when they arrived in the area at about 4 p.m.  The others were quick to flee at the sight of the police, he said.

Torres said they received information from the arrested individuals that it was Alvarado who organized the cockfight.

(The barangay captain is a known tigbakay aficionado and many saw him during the cockfight [on Friday].)

Basillote, Madarang, and Banate are from Barangay Lamesa while Gabutin and Dumdum were from the neighboring barangays of Prenza and Biasong.

All of the five suspects are currently detained in the Balamban Police Station detention facility. / dcb