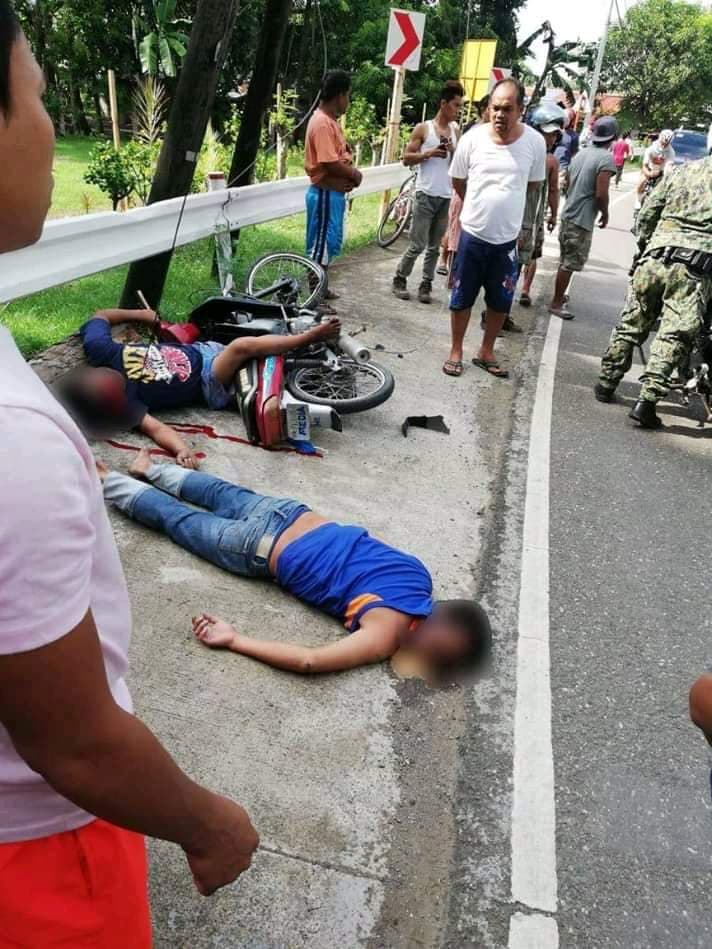 Two men were killed in a road accident in Barangay Ibo, Toledo City late on Saturday afternoon, May 16, 2020. | Contributed Photo

CEBU CITY, Philippines — Two men were killed in a motorcycle crash in Toledo City late afternoon on Saturday, May 16, 2020.

Both victims were not wearing helmets when the crash happened, said Police Master Sergeant Delbert Barrera of the Toledo City Police Station.

The victims, who were identified as Pablo Poloyapoy Rojero, 38, and Joannes Manaytay Yu, 40, were already dead when brought to the Toledo City Hospital.  They are residents of Sitio Hinulaan in Barangay Poblacion.

Barrera said that their untimely deaths could have been avoided if they wore helmets to especially protect their heads in case of a crash.

(If motorists would only listen [to constant reminders on their need to always wear helmets] deaths could have been avoided.)

The road accident in Barangay Ibo happened a few hours after a truck also rammed a roadside home in Sitio Bawud Curbada in Barangay Madugo.

Barrera said aside from observing the 60-kilometer speed limit, Rojero and Yu’s death should also serve as a reminder for other motorists to always wear helmets and not to take their safety for granted.

Police investigation showed that the two men were on board a Yamaha Crypton which Rojero drove.  They came from Barangay Poblacion and were headed for Barangay Ibo when the accident happened at around 3 p.m.

Barrera said that Rojero lost control of his vehicle after he maneuvered a blind curve in the area, the reason why he crashed into a roadside railing.   Yu was thrown off the motorcycle and landed on the concrete sidewalk.

(This is an example of what we have constantly been reminding our motorists on the need to always wear helmets to especially protect their heads [in case of a crash.])