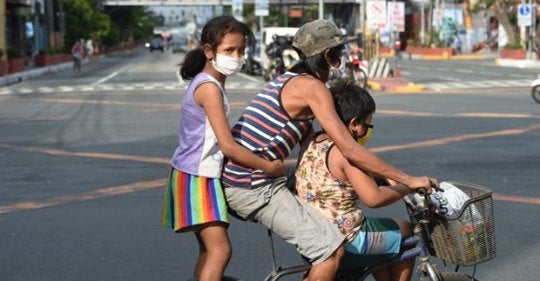 The number of Filipino families who were hungry due to lack of food almost doubled amid the COVID-19 pandemic, according to the results of a special Social Weather Stations (SWS) survey.

The survey, conducted through mobile phone and computer-assisted telephone interviews, found that 16.7 percent or around 4.2 million families suffered from involuntary hunger at least once for the past three months, which nearly doubled the 8.8 percent or 2.1 million families in December 2019.

The hunger rate is the highest under President Duterte’s term and the highest since September 2014, with 22 percent or 4.8 million families.

Malacañang is saddened over the results of the survey, even as presidential spokesperson Harry Roque reassured the public that the government was doing all it could to alleviate the suffering of Filipinos, especially poor families affected by the lockdown.

“That is really sad. That’s why we are doing all we can to give aid to our countrymen. We want to avoid that kind of sad news. But when the economy is closed, many end up suffering,” Roque said.

He added that President Rodrigo Duterte understood the plight of millions of Filipinos reeling from the economic effects of the lockdown due to the COVID-19 pandemic.

“That is why we are appealing for everyone’s cooperation, so we can open up our economy sooner and there will be fewer hungry Filipinos in our country,” Roque said.

The government has been distributing P200 billion in financial aid to millions of poor Filipino families as part of the social amelioration program amid the COVID-19 pandemic.

The government has allowed the transport and food production to ensure food security during the ongoing community quarantine.

However, the lockdown forced many businesses to close down temporarily due to restrictions in community quarantine areas.

The easing of restrictions has allowed the resumption of operations in some sectors, except for leisure, entertainment, amusement, gambling, tourism, fitness and personal care.

The survey also found that 99 percent of Filipino families said they received help with food from the government since the COVID-19 crisis began.

Out of the 14.2 million hungry families, 13.9 percent or 3.5 million experienced hunger only once or a few times in the last three months while 2.8 percent or 699,000 families were often hungry.

They are followed by the Visayas, which increased to 14.6 percent from 9.3 percent; and Luzon outside Metro Manila with 12.6 percent from 6.3 percent. —Julie M. Aurelio and Inquirer Research