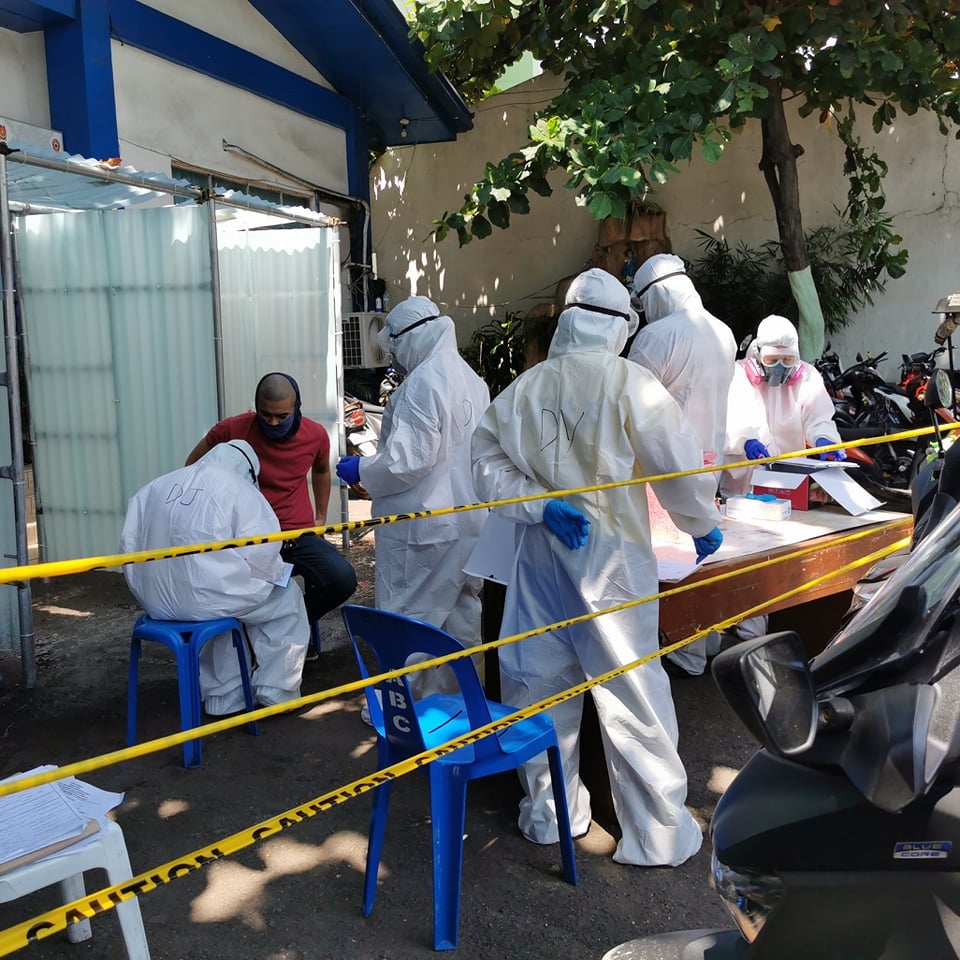 Personnel of the Cebu City Health Department undergo disinfection after collecting swab samples from more than 50 police officers at the San Nicolas Police Station, where two detainees were confirmed to have COVID-19. | Photo courtesy of Councilor Dave Tumulak

CEBU CITY, Philippines — As the Carbon and the San Nicolas Police Stations’ personnel still await for the clearance to get back to work after two to three weeks under quarantine, buy-bust operations and community engagements for these two police stations have stopped for the meantime,

Both Police Captain Alvin Llamedo, Carbon Police station (Police Station 5) chief, and Police Major Eduard Sanchez, San Nicolas Police Station (Police Station 6) chief, said that aside from the paperworks, they were now limited to only monitoring the security in their area and relying on the augmented personnel who were tasked to perform regular duties on the streets on behalf of the personnel under quarantine.

The Carbon Police Station policemen including Llamedo, who are 47 all in all, have been placed under quarantine for at least two weeks now.

Meanwhile, all 56 police officers of the San Nicolas Police Station have also been placed under quarantine  in the same period.

Sanchez said that of the 56, 36 were under office quarantine while the others were placed under home quarantine.

He also said that five of the station’s police officers were also found positive of the virus.

Even when both stations had received information about illegal activities, they said they could not immediately conduct surveillance to confirm these as they had limited personnel on the ground.

Llamedo, who is used to closely monitoring activities in his area through daily patrols and barangay visitations, admitted that it was hard to conduct buy-bust operations at this time given that they could not properly plan monitoring.

For Sanchez, their station’s operation have been fully transferred to the augmented personnel that were given a makeshift station just in front of the San Nicolas Police Station office.

He said that although his men, who were under quarantine with him, would like to help in responding to alarms int he area, they could only help with giving instructions about the scope of the area and with the process of the paperworks.

Sanchez said that all newly arrested persons were being detained in a bus that had served as a detention cell for heir station as of the moment.

“After ani back to work gyud kay daghan apasunon (After this we will go back to work as there are things that needs to be done quickly),” said Sanchez.

Both Llamedo and Sanchez said that they were ready to go back to work at any time as long as they would receive the approval from the health department. | dbs

Read Next
54 LSIs in Cebu sent home to Mindanao