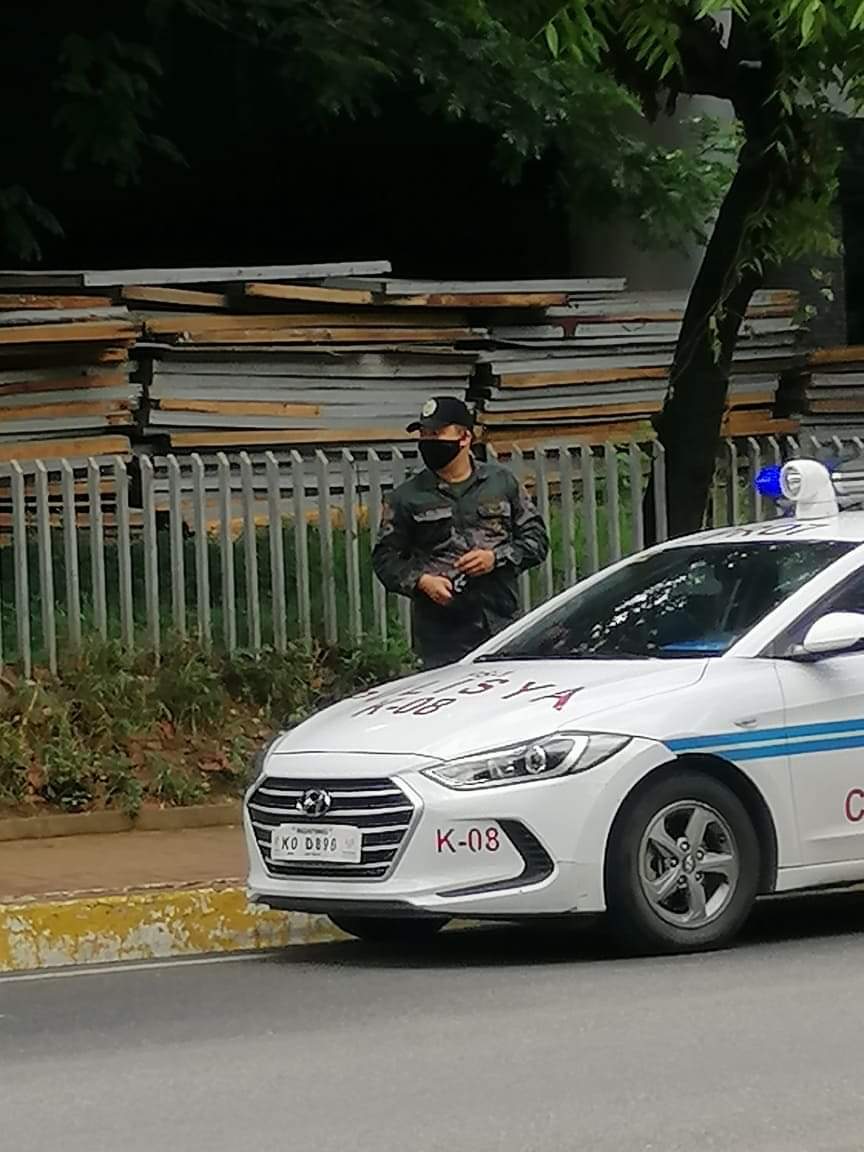 A uniformed policeman standing in front of UP Cebu when the Anti-Terror Bill rally was held on June 5, 2020. | Photo courtesy of Tug-ani

CEBU CITY, Philippines — The University of the Philippines Cebu (UP Cebu) condemned police in Cebu City for trespassing campus premises last Friday, June 5, in an attempt to arrest students participating a rally against the controversial Anti-Terror Bill.

“After having reviewed video-footage of the incident and documented accounts of witnesses of the protest against the proposed Anti-Terrorism Act last Friday, we strongly condemn the violent dispersal of the protest done by police forces, with many of their members in civilian clothing,” UP Cebu administration said in an official statement issued on Sunday, June 7.

The statement came two days after they released an ‘initial statement’, saying that an investigation will be rolled out to shed light on the incident.

These included reports of police violating an agreement between UP and the Department of National Defense (DND) made 31 years ago. On Sunday, UP Cebu said they did not ‘sanction the entry of the police on the campus’.

“We have not sanctioned the entry of the police on our campus, and we denounce their forceful trespassing to our premises,” the statement read.

“The UP Cebu administration maintains that the 1989 UP-DND Peace Accord be upheld and respected by our police forces…We call on the Mayor of Cebu City and the Chief of Cebu City Police Office to seriously look into this clear transgression against our constituents and our property,” they added.

READ MORE: UP Cebu: Probe ongoing to see if UP-DND Accord was violated

The UP-DND Peace Accord of 1989 bars state forces from conducting operations without prior permission from university officials.

“We maintain that the University of the Philippines Cebu shall stay as a safe space of academic discourse, where our constituents remain free in their exercise of academic freedom, free from any form of threats, harassment, or intimidation,” said the statement.

UP Cebu administration also joined the calls for the immediate release of the eight arrested individuals, some of whom happened to be their students and alumni.

“(We demand) for the immediate release of our students and alumni who were unduly arrested and detained, along with four others, for exercising their right to peaceful assembly in our campus that day… Our students are not criminals and they were despicably manhandled by police forces who were in full battle gear and heavy firearms during the arrest,” they added.

University officials also said that staging the protest-rally against the Anti-Terror Bill right in front of their premises did not violate any existing law.

“The constitutional right of individuals to express their views publicly and to hold protests peacefully and safely is not proscribed under any law – not the Bayanihan Law, nor even under RA11332 or the Mandatory Reporting of Notifiable Diseases and Health Events of Public Health Concern Act,” the statement read.

Last Friday, seven activists and one passerby were brought to police custody after they were accused of violating quarantine protocols by staging a rally calling for the rejection of the Anti-Terror Bill. They are detained in Waterfront Police Station (Cebu City Police Station 3) pending the decision of the city prosecutor.

The police, on the other hand, maintained that no law was violated during their dispersal operation, and reiterated that mass gatherings such as protests with more than 10 participants were not allowed in areas under general community quarantine (GCQ), including Cebu City. /dbs

TAGS: Anti-Terror Bill protest in front of UP Cebu on June 5, UP Cebu Adminstration, UP Cebu denounces police trespassing in campus