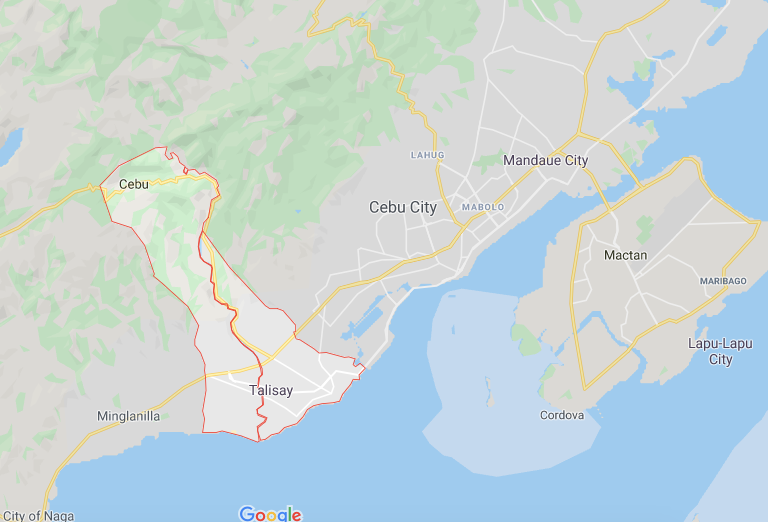 Map of Talisay City in southern Cebu | via Google Maps

CEBU CITY, Philippines — A five-year-old girl undergoing chemotherapy in a private hospital is among the latest cases of the coronavirus disease 2019 (COVID-19) in Talisay City.

The Talisay City Public Information Office (PIO) said that the 5-year-old girl from Barangay Mohon was admitted in a private hospital for exhibiting influenza-like symptoms while undergoing chemotherapy.

The girl is currently being treated in the hospital.

Aside from the child, Talisay City also recorded an additional 14 new cases of the coronavirus disease 2019 (COVID-19) and 8 recoveries on July 9, 2020.

Four of the cases are mothers, who recently gave birth, two are from Barangay Poblacion, while the others came from Barangays Jaclupan and Tangke.

They gave birth at the Talisay District Hospital (TDH) from July 5 to July 6, 2020. All three are asymptomatic and are now under quarantine.

Both are asymptomatic and are being quarantined in a government facility in Cebu City.

The rest of the cases are contacts of previous cases, were swabbed upon being admitted to the hospital due to comorbidities, or were swabbed due to influenza-like symptoms.

The city now has a total of 464 cases of the COVID-19, the highest case among the towns and cities of Cebu Province outside of the Tri-cities area — Cebu City, Mandaue City and Lapu-Lapu City

With the addition of 8 new recoveries, the city now has a total of 163 recoveries for a recovery rate of 35.1 percent.