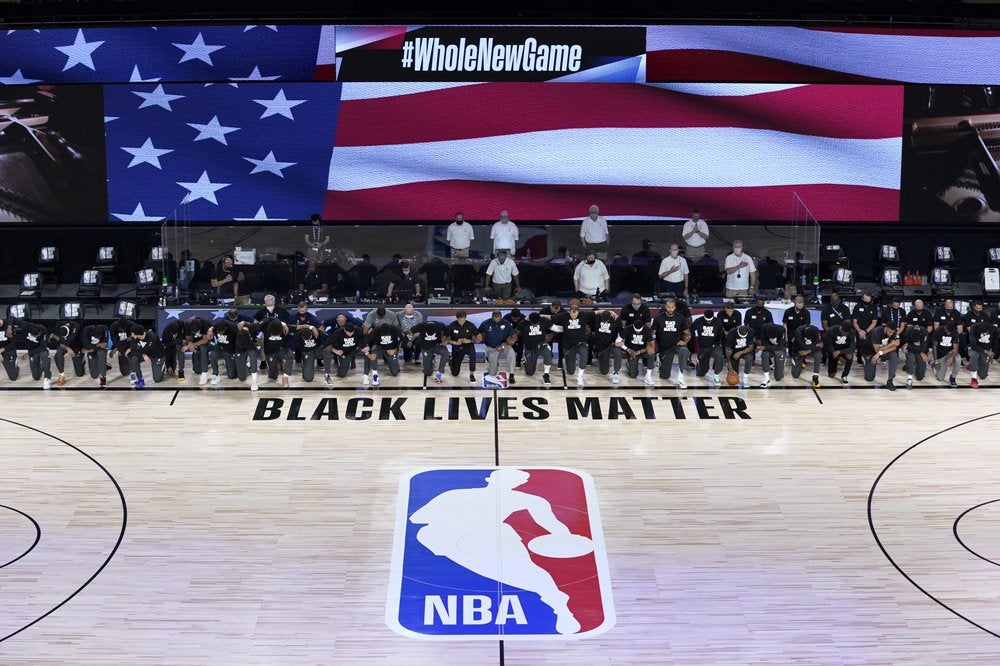 Members of the New Orleans Pelicans and Utah Jazz kneel together around the Black Lives Matter logo on the court during the national anthem before the start of an NBA basketball game Thursday, July 30, 2020, in Lake Buena Vista, Forida. | AP Photo

LAKE BUENA VISTA, Fla. — Players and coaches from the New Orleans Pelicans and Utah Jazz knelt alongside one another before the first game of the NBA restart on Thursday night (Friday morning, July 31, 2020, Philippine time), an unprecedented image for the league in unprecedented times.

The coaches — New Orleans’ Alvin Gentry and Utah’s Quin Snyder — were next to one another, their arms locked together. Some players raised a fist as the final notes of “The Star-Spangled Banner” were played, the first of what is expected to be many silent statements calling for racial justice and equality following the deaths of, among others, Breonna Taylor and George Floyd in recent months.

Even the game referees took a knee during the pregame scene, which occurred with the teams lined up along the sideline nearest where “Black Lives Matter” was painted onto the court. The Los Angeles Lakers and Los Angeles Clippers were expected to also take some sort of action before the second game of the re-opening night doubleheader later Thursday.

“It’s so important at this point for us to be unified and be able to peacefully protest many of the critical things that are going on in the country right now,” Snyder said.

The NBA has a rule going back to the early 1980s that players must stand for the national anthem. NBA Commissioner Adam Silver, anticipating that players would kneel during these games at Walt Disney World, has made clear that he supports peaceful protests.

Many players warmed up wearing shirts that said “Black Lives Matter.” Thursday also marked the debut of new jerseys bearing messages that many players chose to have added, such as “Equality” and “Peace.”

The NBA season was suspended when Rudy Gobert of the Jazz tested positive for the coronavirus and became the first player in the league with such a diagnosis. Gobert was diagnosed on March 11; two days later, Taylor, a 26-year-old Black woman, was fatally shot when police officers burst into her Louisville, Kentucky apartment using a no-knock warrant during a narcotics investigation. The warrant was in connection with a suspect who did not live there and no drugs were found.

Then on May 25, Floyd died after a white Minneapolis police officer pressed a knee into the Black man’s neck for nearly eight minutes. That happened on a street, with the images — and sounds of the man saying he couldn’t breathe, then crying out for his mother — all captured on a cell phone video.

NBA players have used their platforms — both in the bubble and on social media — to demand equality, to demand justice for Taylor. Coaches have also said it is incumbent on them to demand change and educate themselves and others. And the pregame actions by the Jazz and the Pelicans were just the start of what is expected to be a constant during the remainder of this season.

“It’s taken a very long time to get this momentum going,” San Antonio coach Gregg Popovich said in a video that aired pregame, a project organized by both the NBA and the National Basketball Players Association. “And it cannot be lost.”

Gentry said he appreciated the accidental symmetry that came from the first games of the restarted season coming only hours after the funeral for U.S. Rep. John Lewis, who died July 17 at the age of 80.

Lewis spent most of his life championing civil rights and equality and was the youngest speaker at the 1963 March on Washington — the one where Martin Luther King Jr. delivered his “I Have a Dream” speech. Gentry said he believes this movement, like the one Lewis helped spark six decades ago, will endure.

“If you talk to some of the younger generation, I think this is here to stay. I really do,” Gentry said. “I have a 20-year-old son and a 22-year-old son, and I know that they feel like this is the most opportune time for us to try to have change in this country.”

Read Next
Augmented police officers to stay in Cebu City