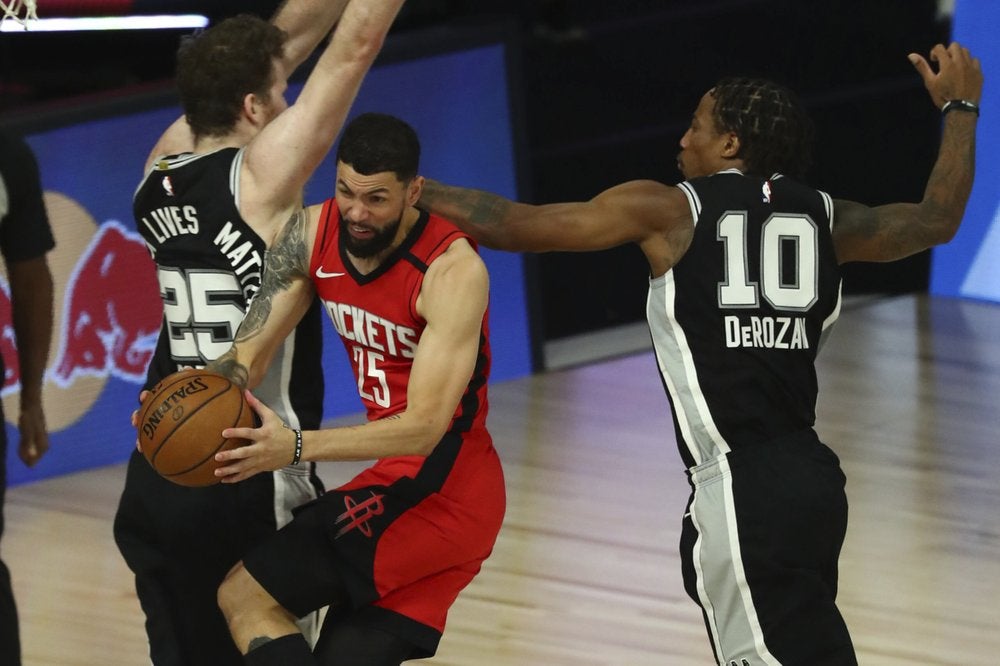 LAKE BUENA VISTA, Florida — The Spurs aren’t out of it yet.

Keldon Johnson had 24 points and 11 rebounds, and San Antonio kept alive its chances of becoming the first team in NBA history to make 23 consecutive playoff appearances with a 123-105 victory over the Houston Rockets on Tuesday, (Wednesday morning, August 12, 2020, Philippine time).

San Antonio has won three straight and five out of seven since arriving in the Florida bubble.

Johnson said his mindset since the season restarted has been to fill in whatever role is asked of him.

“Whether it’s hustling, running the floor — just doing whatever I need to do to help us win,” he said. “Help from my teammates has definitely helped the game slow down for me.”

Spurs coach Gregg Popovich said Johnson is playing with the confidence they saw when they drafted him 29th overall last year.

The Western Conference is guaranteed to have a play-in for its final playoff spot, with Memphis beginning the day with just a half-game lead over Portland and one game ahead of Phoenix and San Antonio.

The Spurs will need help to be one of the teams playing this weekend for the final spot in the West, but made sure they couldn’t be eliminated Tuesday with their win.

Russell Westbrook had 20 points and seven turnovers in his first game back in the lineup for Houston after missing two games with a bruised right quadriceps. Jeff Green had 17 points. Ben McLemore added 16.

Rockets coach Mike D’Antoni said the most important part of their final two games before the playoffs will be getting Westbrook some quality minutes so that he is fresh.

“Get some of the rust off, build up his legs a little bit,” D’Antoni said. “We’ll try to get through these two games and just try to get guys physically ready to go next week.”

Westbrook said he isn’t worried about finding his timing before the playoffs begin.

The Spurs took control in the second quarter, outscoring the Rockets 35-24. San Antonio led by as many as 29 points.

San Antonio built a 19-point lead in the first half. DeRozan set the tone with 15 points in the opening 24 minutes, with Lonnie Waker IV, Poeltl and Johnson each scoring 10.

Read Next
Suspect in student’s killing nabbed in Consolacion