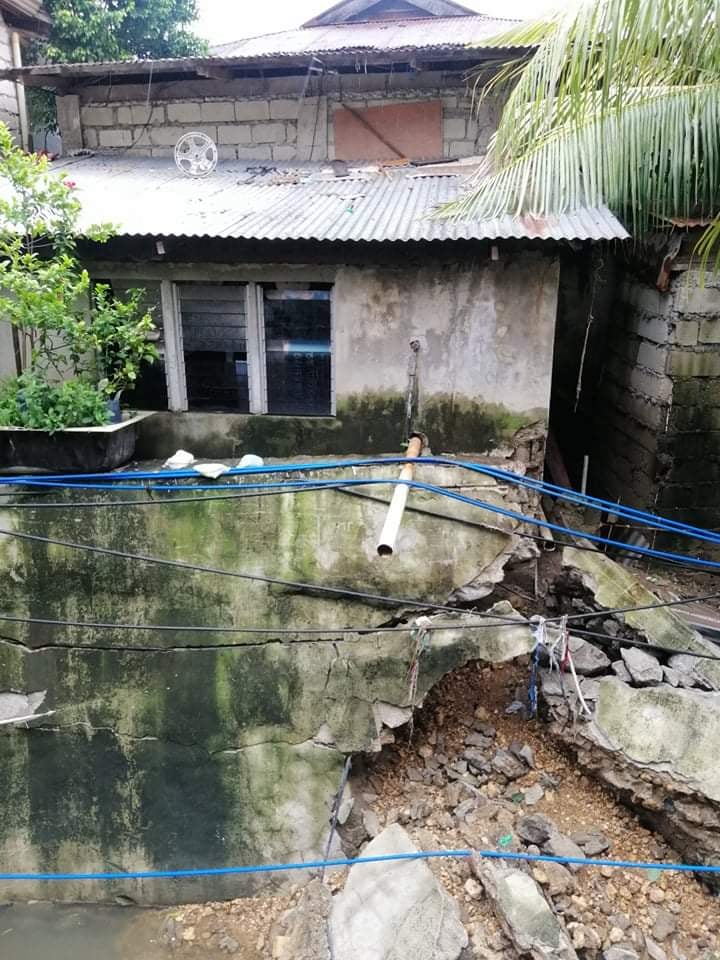 CEBU CITY, Philippines — A riprap wall in Barangay Kasambagan in Cebu City collapsed due to a minor landslide on the evening of September 16, 2020 after the continuous rains brought by a strengthened Southwest monsoon.

Councilor Jerry Guardo, chairperson of the City Council committee on infrastructure, inspected the area on Thursday morning, September 17, 2020, to see what would need to be done to ensure the safety of the nearby residents.

This would be the sixth landslide that occurred in Cebu City since September 15, 2020, but just like the others in Barangays Talamban, Kalunasan, Busay, Lahug, and Guadalupe, no one was hurt during the incident.

The riprap wall collapsed towards the Mahiga Creek preventing it from causing major damage to nearby homes.

One home was partially damaged, but two others were in danger of collapsing, and so the residents are advised to evacuate as early as now.

Guardo said the incident would need to be investigated because the wall was just recently built three years ago yet it already collapsed.

“Based on my initial assessment, you can see the riprap wall, this has to be checked. The riprap wall design has no cable, and the material looks like these are substandard. For me, this is a project under DPWH, they should conduct an investigation,” said Guardo.

He added the Department of Public Works and Highways (DPWH) awarded the contract to a local contractor two years ago.

Engineer Geronimo Rigor Capariño of the DPWH, who also inspected the collapsed wall, said that the riprap wall already existed and the contractor only placed an additional 100-millimeter concrete.

The water may have passed through the back portion of the riprap wall causing the entire wall to collapse. The flooding behind the riprap wall reached knee-deep increasing the pressure on the destabilized structure.

Capariño said that they would discuss what to do with the collapsed wall and how to clear the area immediately for the safety of the nearby residents.

Guardo is calling for urgency of action over the matter as the collapsed wall had fallen over the creek and could cause an obstruction in the flow of water.

The eroded soil has also placed nearby structures at risk of collapsing.

(As of now, no one should stay in these houses because if there will be a flood it will be dangerous because the house would probably collapse. It will need more immediate reinforcement.)

He said he hoped the DPWH would act swiftly so no untoward incident would happen to the residents in the area. /dbs