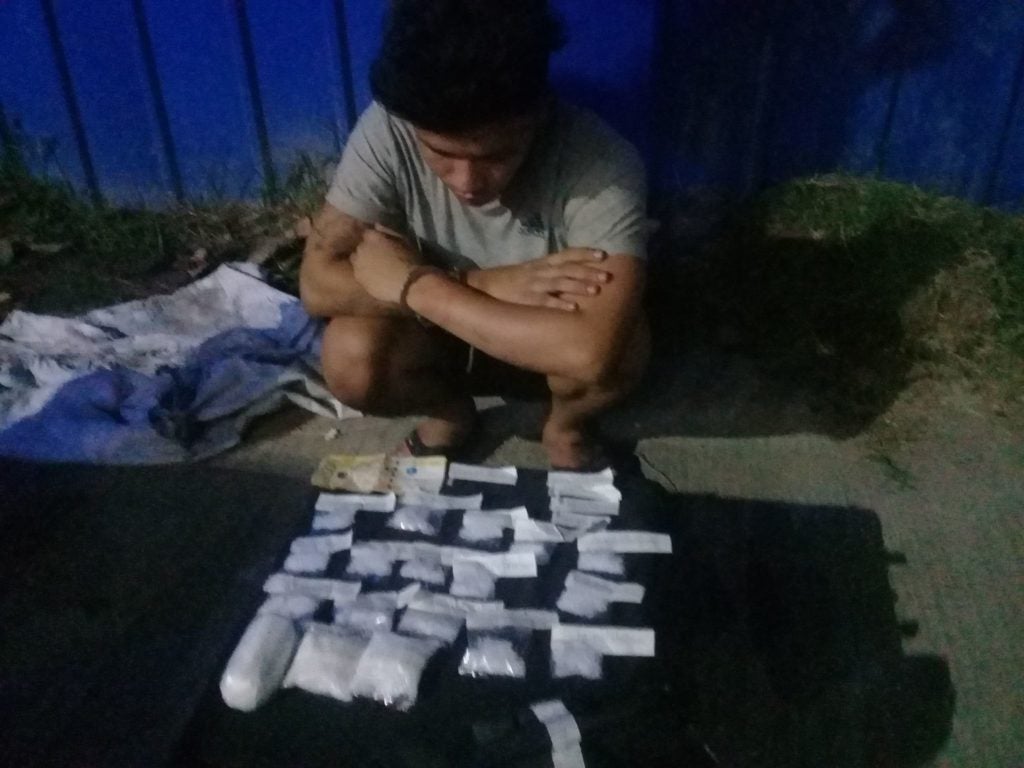 Policemen in Mandaue City arrested a high-value individual with P2 million worth of suspected shabu during a buy-bust operation in Barangay Subangdaku Friday night, September 25, 2020. | Photo Courtesy of Norman Mendoza

CEBU CITY, Philippines –Packs of suspected shabu worth around P2.1 million were confiscated by the police from the possession of two high-value individuals whom they arrested Friday night, September 25, in separate buy-bust operations in the cities of Cebu and Mandaue.

Both suspects, who were identified as Christian Rey Adante, 24, and Jorich Villamor delos Reyes, 39, are Cebu City residents.

Police Major Aldrin Villacampa of the Police Station 5 in Mandaue City said that they placed Adante under surveillance after they received information on his illegal drug activities from a drug personality whom they arrested in an earlier operation.

Villacampa said they recovered 300 grams of suspected shabu worth P2 million from the suspect, who was unable to resist arrest after he was surrounded by the police.

(We tried our luck by sending him a text message to post an order and he agreed to make the delivery that is why we were able to plan the [buy-bust] operation.)

During the interrogation, Adante told Mandaue City police that he recently transferred to Lapu-Lapu City to avoid arrest by Cebu City policemen who have been tailing him.

Two hours later, Cebu City police also arrested delos Reyes in a buy-bust operation Sitio Maharlika in Barangay Sambag 2.  The suspect, who is a resident of Rosal Street, Barangay Kamputhaw, was arrested with 20 grams of suspected shabu worth P136, 000, and a .45 caliber handgun with five live ammunitions.

Police Major Randy Caballes, head of the intelligence unit of the Cebu City Police Office (CCPO), said they placed Delos Reyes under surveillance for one week after they received information on his alleged involvement in illegal drug activities.

During the surveillance, they found out that he is able to dispose 200 to 300 grams of shabu per week to buyers located in Barangays Sambag 2 and Kamputhaw in Cebu City and even parts of Mandaue City.

“He worked as a painter for several years and started selling illegal drugs since last year when he was introduced to a certain ‘Waway’,” said Caballes.

Delos Reyes told the police that he would source illegal drugs from a detainee of the Cebu City Jail, who would give him instructions on the delivery of his shabu.

As of this writing, Caballes said they continue to gather more information on the real identity of ‘Waway’ and his other contacts.

Earlier, Police Colonel Josefino Ligan, chief of CCPO, said that he plans to meet with jail officials to discuss the proliferation of illegal drugs that are sourced from detained inmates. / dcb