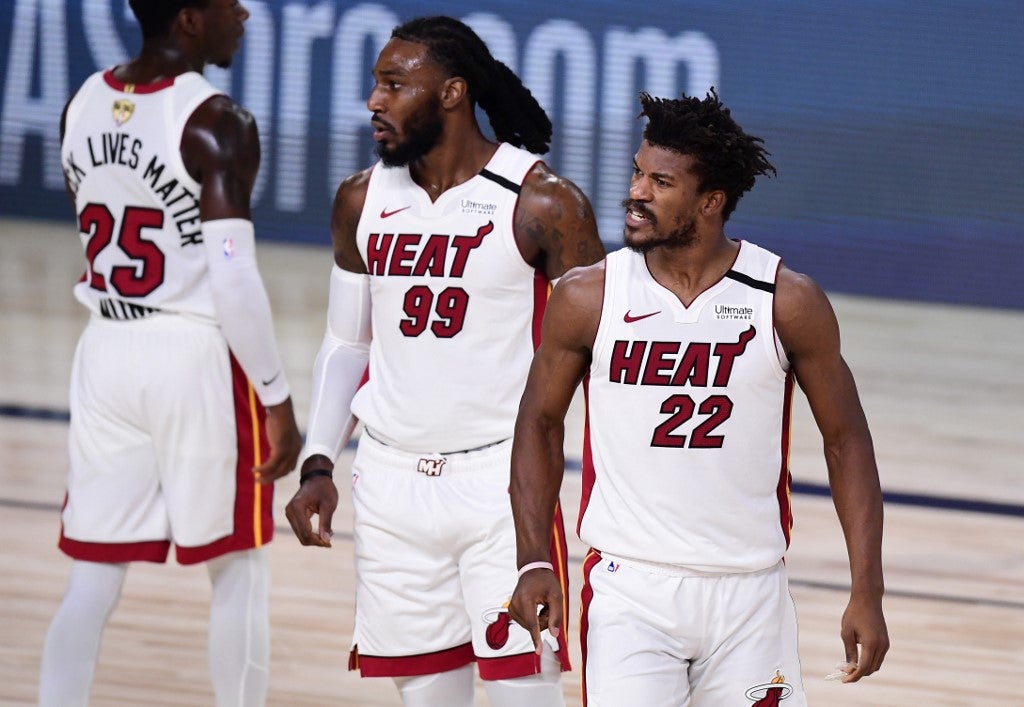 LAKE BUENA VISTA, FLORIDA – OCTOBER 02: Jimmy Butler #22 of the Miami Heat reacts during the first half against the Los Angeles Lakers in Game Two of the 2020 NBA Finals at AdventHealth Arena at ESPN Wide World Of Sports Complex on October 02, 2020 in Lake Buena Vista, Florida. NOTE TO USER: User expressly acknowledges and agrees that, by downloading and or using this photograph, User is consenting to the terms and conditions of the Getty Images License Agreement. | Douglas P. DeFelice/Getty Images/AFP

MANILA, Philippines — Jimmy Butler knows the dangerous situation the Miami Heat are in heading into Game 3 of the NBA Finals against the Los Angeles Lakers, and he’s damn well sure that there’s no point in them to not play at their best.

The Heat are down 0-2 against the Lakers and if their crippled roster’s not enough of a burden, history is also not on their side.

For the past 25 postseasons, the Lakers are 29-0 when they take a 1-0 lead. A 2-0 advantage may not be insurmountable with teams able to overcome such deficits in the past, but it certainly looks as such given how the Lakers have been able to dominate the Heat in the first two games.

But despite the Heat’s predicament, Butler isn’t giving up just yet.

“That we’re never giving up. We’re going to fight and we’re going to ride this thing until the wheels fall off. It’s not over,” said Butler in a virtual press conference after the Lakers’ 124-114 win in Game 2. “We’re just down 0-2, so we got to do something special. We’re capable of it and I wouldn’t want to be in the trenches with any other guys except for the ones that we have.”

The Heat played without All-Star center Bam Adebayo and starting point guard Goran Dragic, who are both recovering from injuries, leaving Butler to carry much of the load on both ends of the floor.

Butler played for 45 minutes and finished with 25 points, eight rebounds, and a playoff career-high of 13 assists. Kelly Olynyk played heavy minutes at the frontcourt to finish with 24 points and nine boards.

But their combined efforts weren’t enough to supplant LeBron James and Anthony Davis.

James had a near triple-double of 33 points, nine rebounds, and nine assists while Davis had 32 points on 15-of-20 shooting from the field and 14 boards.

Still, Butler believes it’s too early to write off the Heat especially with how they’ve been able to prove others wrong throughout this postseason.

The Heat entered the playoffs as the fifth seed in the Eastern Conference with very few within the NBA circle predicting they’d made it to the Conference Finals.

Miami, however, defied the odds after sweeping the Indiana Pacers, closing out the favored Milwaukee Bucks in five games, and dispatched the Boston Celtics in six games to enter their first Finals since 2014 when James still played for the franchise.

“But like I said at the beginning of this thing, we got to play damn near perfect in order to beat those guys over there. We have yet to do it and if we don’t do it soon, it’s not going to be pretty.”