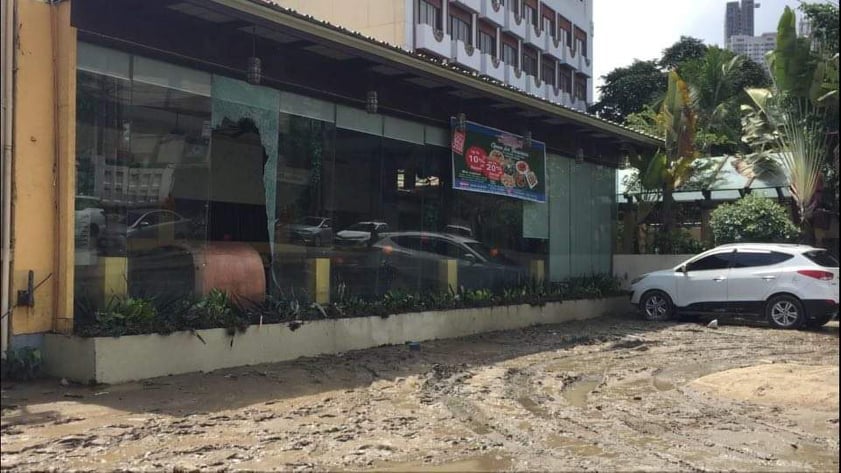 A broken window, mud and water soaked furniture of a restaurant are traces of the damage caused by the wave of floodwater left in the wake of a bus driving through the flooded street in General Maxilom Avenue in Cebu City. | CDN Digital photo by Delta Letigio

CEBU CITY, Philippines — Cebu City Councilor Jerry Guardo is calling for an investigation on a bus that drove at high speed through waist-deep floodwaters at General Maxilom Avenue creating a huge wave in its wake that damaged some establishments in the area on Tuesday night (October 13).

Netizen Lacida Geno captured the incident on a video, which he sent to CDN Digital. The video showed a bus driving through the flooded avenue at high speed, creating a wave of floodwater in its wake, which hit a restaurant’s glass window hard, causing it to break and allowing the floodwater to enter the restaurant.

Geno and his spouse sought refuge in the restaurant to stay dry and wait for the floodwaters to subside. The couple said that they and the other customers inside the restaurant suffered trauma because of the incident.

“I don’t work there, we just don’t have choice. We need to stop there for us not to be swept by the flood, that’s what we thought. Until the glass was shattered and the water went inside in an instant. Our car was even floating everytime a big truck passes by. Which has cause trauma to my wife and the other customers that were there,” he said.

Aside from the restaurant, the LandBank of the Philippines branch in the area also suffered damage after the wave left in the wake of the bus driving through the flooded street caused the floodwater to rise inside the bank damaging equipment such as computers and other fixtures inside.

The wave of floodwater left in the wake of the passing bus also damaged doors and windows of smaller establishments in the area.

Guardo said he would be inviting the owners of the establishments, the bus liner, and the Cebu City Transportation Office (CCTO) to conduct an investigation of the incident.

“We need to know what happened and who should be responsible for the damage,” said the councilor.

Guardo said the city government would try to provide assistance to the establishments which were seriously damaged in the flood.

The CCTO told CDN Digital through their spokesperson, Ronnie Nadera, that they had not received any complaints about the bus yet.

They only heard of the incident through media reports and they would be looking into the matter through their legal department.

They will also endorse the issue to the Land Transportation Office (LTO) for possible charges since the bus may have caused damage to properties.

Nadera urged buses to pass through flooded areas to drive slowly to avoid damaging the establishments nearby.

(Let us have common courtesy. We don’t know that people may be on the sidewalk when we pass by. Let us slow down.)

He said cars and motorcycles should also slow down when passing through flooded areas so as not to create waves that can be a nuisance to pedestrians as well./dbs