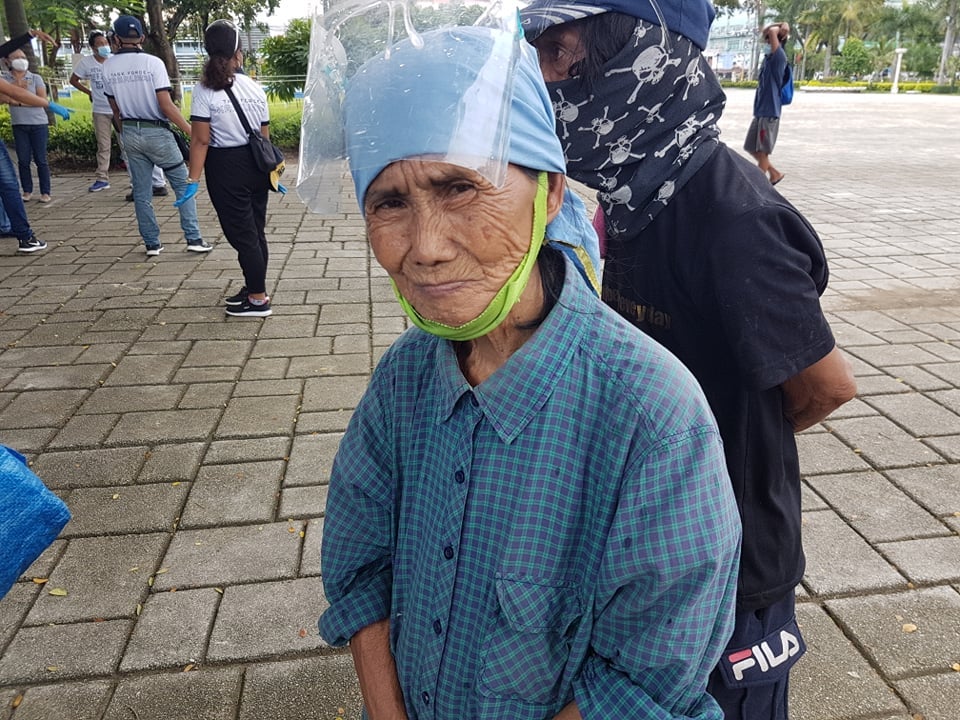 Ejolin was one of 100 street dwellers who were ‘rescued’ by personnel of the Cebu City Police Office (CCPO), Prevention Restoration Order Beautification and Enhancement (PROBE) team, and Department of Social Welfare Development (DSWD) on Friday morning, October 16, 2020.

As of 12 noon, the rescued street dwellers and mendicants were brought to the Plaza Independencia for the processing of their identities.

Ejolin, who is originally from Danao City,  has been in Cebu City for 15 years now.

She left her hometown with her husband to try their luck here. She said that for some time now, they made a living from doing  chores for establishments and caroling on the streets during Christmas season. But her husband suddenly died, leaving her alone to continue with what they usually do.

(It’s  difficult to go back because I don’t have money. How will I eat? How can I buy medicines?)

Police here said they will be rounding up street dwellers and mendicants in compliance with the directive of the Department of Interior and Local Government (DILG).

Police Lieutenant Colonel Wilbert Parilla, deputy for operations of the Cebu City Police Office, said on Thursday, October 15, that they will put the rescued street dwellers  in a shelter and start processing requirements so they can be sent back to their respective homes.

Read: Cebu City police to round up street dwellers, mendicants

But for dwellers like Ejolin, this would be tough on them since they cannot earn the same way as when they are here.

(It’s better here because you can sell, you can carol and people would still give a little.)

Ejolin said if the government of Cebu City would hear her out, she would plead to just let them stay.

(I would just ask them to let me stay.)

Police here, however, are bent on continuing the rescue operation of street dwellers and mendicants in the city.

Police Colonel Josefino Ligan, chief of CCPO, said that they would be recommending to the Cebu City Government  to sustain the rescue program  to prevent these individuals from coming back.

According to Ligan, the goal would be to put an end to the continuous cycle of street dwellers going back to the same area where they were rescued.

Should they not be given a chance, Ejolin said there’s nothing else to do but to find ways to survive on their own.

Last Tuesday, Cebu City Mayor Edgardo Labella also ordered the rescue of these individuals since according to him, they pose a risk of spreading the Coronavirus Disease 2019 (COVID-19) since they tend to crowd public places and sidewalks.