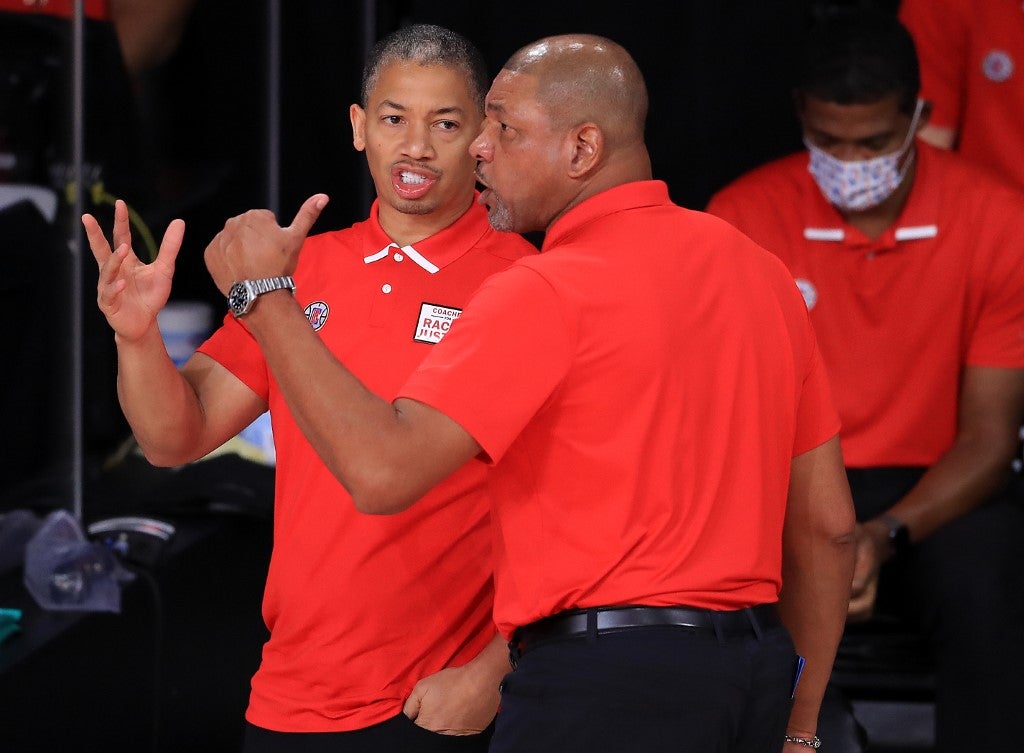 FILE Photo– Assistant coach, and now head coach, for the LA Clippers Tyronn Lue talks with Doc Rivers of the LA Clippers during the fourth quarter against the Denver Nuggets during the 2020 NBA Playoffs on September 12, 2020. Michael Reaves/Getty Images/AFP

Five days after reports emerged that Tyronn Lue was finalizing a deal to become the head coach of the Los Angeles Clippers, the team confirmed the move Tuesday.

While the Clippers didn’t announce the terms of the contract, multiple media outlets reported last week that the sides were hammering out a five-year deal. The team will introduce Lue at a news conference Wednesday morning.

Lue most recently was the Clippers’ top assistant coach under Doc Rivers, who was fired on Sept. 29 after Los Angeles squandered a 3-1 lead and dropped a second-round playoff series against the Denver Nuggets.

Lue, 43, was the head coach of the Cleveland Cavaliers when they won the NBA championship with LeBron James in 2016. Lue posted a 128-83 record over parts of four seasons in Cleveland.

Clippers president of basketball operations Lawrence Frank said in a statement, “Ty has been where we want to go. He is a championship head coach with an extraordinary feel for the game and the people who play it. He’s one of the great minds in our league, and he’s able to impart his vision to others, because he connects with everybody he meets.

“We conducted a thorough search and spoke with fantastic candidates. We found that the best choice for our team was already in our building. As head coach, Ty will put a unique imprint on the organization, and drive us to new heights.”

Lue added in a statement, “The pieces we need are in place — committed ownership, smart management, and elite talent, on and off the court, in the NBA’s best market. My familiarity with the organization, particularly (team owner Steve Ballmer) and Lawrence, confirmed this is where I want to be.

“We have work to do to become champions, but we have the motivation, the tools, and the support to get there. I’m excited to get started.”

Led by Kawhi Leonard and Paul George, the Clippers finished second in the Western Conference in 2019-20 at 49-23, then dispatched the Dallas Mavericks in six games during the first round of the playoffs. In the second round against Denver, Los Angeles led by double digits in each of the final three games but lost them all.

Following the Game 7 loss to the Nuggets, Clippers guard Lou Williams stated that the team had a chemistry issue.

Lue played point guard for seven NBA teams during an 11-year career, averaging 8.5 points and 3.1 assists. He was part of the Los Angeles Lakers’ 2000-01 championship team.

Multiple media outlets reported last week that Chauncey Billups would serve as Lue’s lead assistant, but the Clippers didn’t confirm that news Tuesday. Billups had interviewed for the head-coaching role.

Rivers was hired to be the Philadelphia 76ers’ head coach five days after being fired by the Clippers.