A Coaster for Mandaue’s young athletes 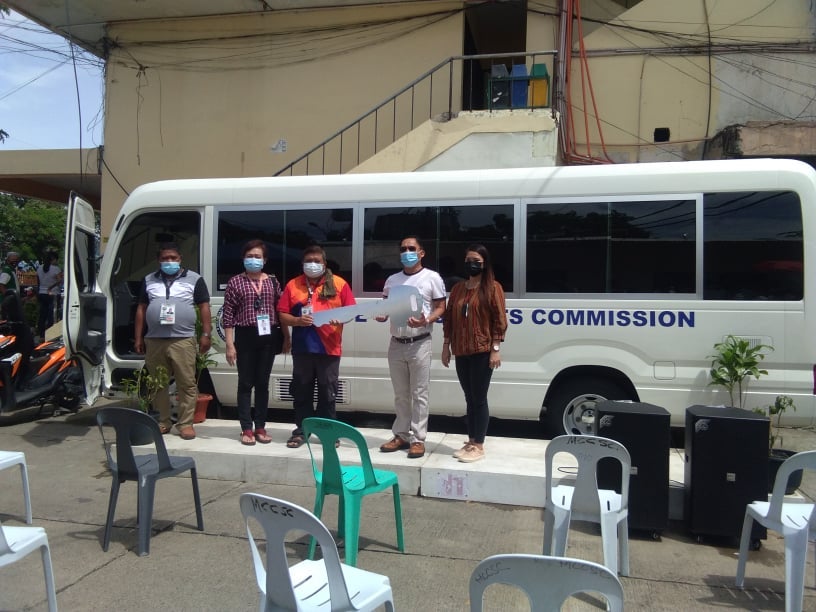 Mayor Jonas Cortes (4th from left)  turns over the Toyota Coaster to the representatives of the Mandaue City Sports Commission on Friday, October 30, 2020. | Mary Rose Sagarino

MANDAUE CITY, CEBU, Philippines — Young athletes of Mandaue City will now have an easier time to get to their venues during sports events after the Mandaue City government turned over a brand new Toyota Coaster to the Mandaue City Sports Commission on Friday, October 30, 2020.

“Og gusto ta no nga to bring out the best sa ato’ng athletes we have to provide quality equipment, tanan facilities, and apil na ato’ng coaster kay every time they compete maglisod jud sa transportation that’s exactly why we provided a coaster, devoted for our athletes,” said Mandaue City Mayor Jonas Cortes during the turnover of the Coaster.

(If we want to bring out the best of our athletes, we have to provide quality equipment, all the facilities and that include the coaster because every time they compete they have problems on the transportation [to get them to the venue of the games], and that’s exactly why we provided a Coaster, devoted for our athletes.)

Florentino “Junjun” De Lapaz Jr., chairman of MCSC, said that the coaster would be very helpful for the Mandauehanons.

(Last year, the mayor and I discussed about how it would be convenient for the young athletes if they have a Coaster to bring the kids to their venues. Sometimes, they would be late to the venue in Palawan. The (mayor) agreed right away. This is the first time that the sports commission had a Coaster.)

He said that the Sports Commision had only used an L300 vehicle before.

According to De LaPaz that the Toyota Coaster cost around P3.7 million to P4 million.

In a year and a half as a mayor, Cortes has already procured 62 vehicles that have been turned over to the Mandaue City Police Office, 27 to the barangays, and the 1 to the Sports Commission.

(If we want to provide quality serves to our fellow Mandauehanons, we have to spend also for transportation so that the service we provide will trickle down to the 27 barangays.)

According to Lawyer John Eddu Ibañez, that there are also incoming fire trucks for the Mandaue City Disaster Risk Reduction and Management Office (MCDRRMO)./dbs