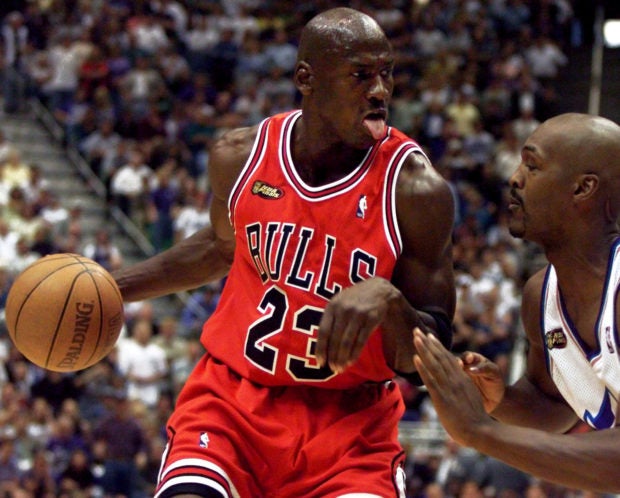 FILE PHOTO: Chicago Bulls guard Michael Jordan of the defending NBA champion Chicago Bulls drives to the hoop against the Utah Jazz’ Brian Russell during the first half of Game 2 of the NBA Finals in Salt lake City, June 5. Jordan led his team with 37 points as the Bulls won the game 93-88. /REUTERS

The official National Basketball Association jersey given to Jordan on the day he signed with the Chicago Bulls in 1984 sold for $320,000, the highest price ever paid for a Jordan jersey.

Jordan held up the red-and-white jersey, which featured his name and the number 23, at his first news conference as a member of the Bulls. He went on to become the heart of the Bulls dynasty that won six NBA championships in the 1990s.

Also at the auction, a basketball jersey worn by Obama in 1979 during his senior year at Punahou School in Hawaii sold for $192,000, a record for a high-school jersey sold at auction, Julien’s said. The white mesh jersey also features the number 23.

And a white number 7 jersey worn by former National Football League quarterback Colin Kaepernick in 2011, during his debut game with the San Francisco 49ers, sold for $128,000, making it the most expensive NFL jersey sold at auction.

Kaepernick has been one of the most prominent and controversial sports figures in the United States.

His decision in 2016 to kneel during the playing of the national anthem in order to put a spotlight on police brutality helped inspire the Black Lives Matter movement. Critics said he was disrespecting the United States and its flag.

Kaepernick has gone unsigned since the 2016 season, although the NFL in June changed course on its previous opposition to his and others’ kneeling protests, saying it made mistakes in not listening to its players.