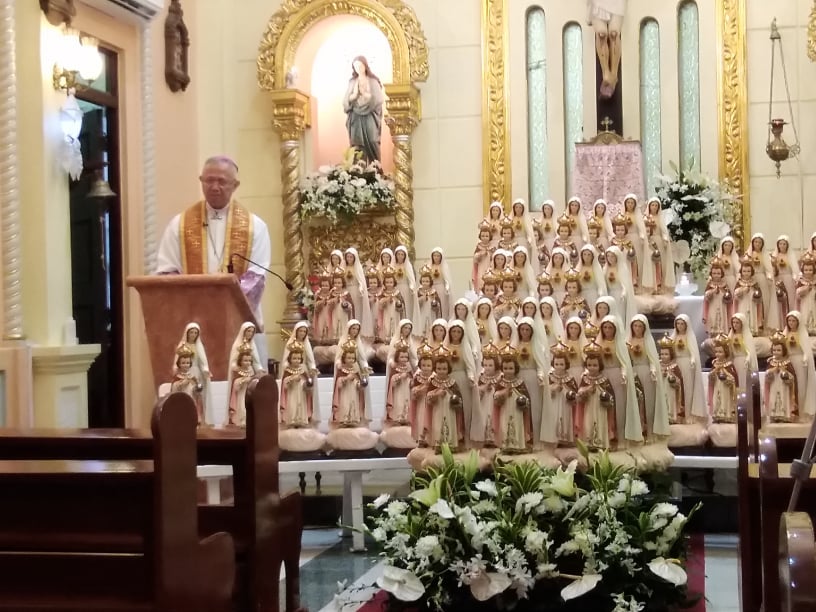 Archbishop Jose Palma blesses the pilgrim images of the Our Lady of Fatima and the Señor Sto. Niño, that will accompany lay missionaries based in Cebu on a special mission to evangelize, catechize the world. | Futch Anthony Inso

CEBU CITY, Philippines — Two hundred pilgrim images of Our Lady of Fatima and Señor Sto. Niño will accompany lay missionaries based in Cebu as they go on a special mission to evangelize and catechize the world.

Cebu Archbishop Jose Palma, who blessed the International Quincentenary Pilgrim images of the Our Lady of Fatima and Señor Sto. Niño on December 28 at the Archbishop’s Palace chapel, said that these pilgrim images would be on a special mission.

Palma said that this mission would be to go forth to all corners of the earth, so that the love of Jesus and Mary might conquer every heart and soul.

He said that this would start here because Christianity was introduced to Asia, with its birthplace here in Cebu, which is known for the historic Sto. Niño de Cebu as the first religious icon of the Catholic faith.

This is also part of the celebration of the Quincentenary anniversary of Christianity to be held here next year.

Palma said that the families from the Alliance of the Holy Family International (AHFI) would bring these pilgrim images to the different countries in Asia, and the rest of the world.

“As a great Catholic nation in South-East Asia, you are truly a city set on a mountain which cannot be hidden…A lamp put upon a lampstand, so as to give light to all,” Palma said.

“Consider how great is your responsibility to those of other faith, and to draw men to the heart of Jesus, the king and center of all hearts…and to the entire world, especially nations nearest to you,” he added.

The AHFI is a lay organization with its general headquarters in Cebu.

Read: Activities for Christianity’s quincentenary celebration to extend until 2022

He said that the AHFI missionaries would bring the pilgrim images with their aim to evangelize and catechize the families in all 195 countries, and preaching the 8 basic elements of the Catholic faith.

“It is your duty to evangelize the message of Christ, to teach the minds, and touch the hearts, from the youngest child to the oldest member of the family, so that all may come to know, love, and serve God in this lifetime,” he said.

Palma said that this missionary work began in 1991 with the late Ricardo Cardinal Vidal, the former archbishop of Cebu and one of the founding bishops of the AHFI.

“Go, make disciples of all nations, preaching them all I taught you; baptizing them in the name of the father, and of the son and of the holy spirit. Remember, I shall be with you until the end of time,” he added./dbs

Read Next
Metro Manila, 9 other areas to start 2021 under GCQ