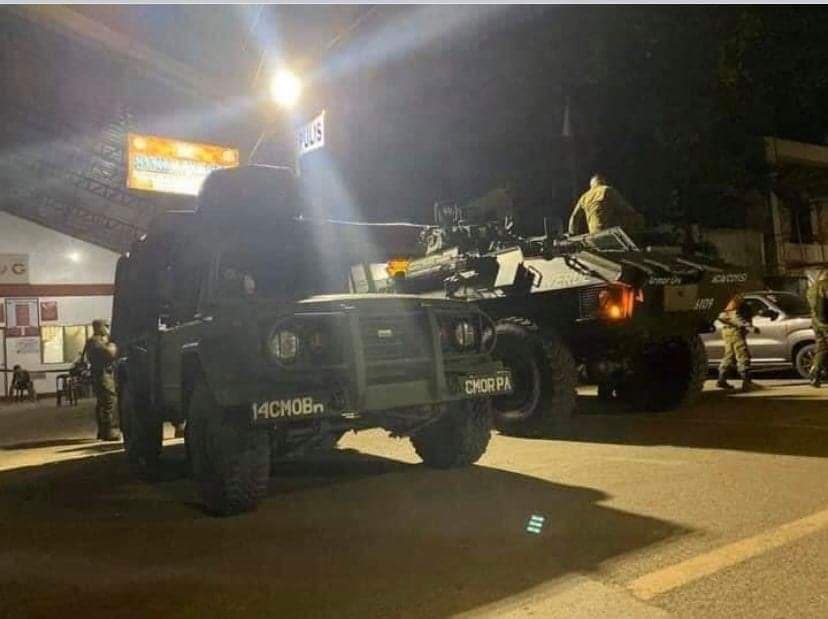 Military tanks were deployed in parts of downtown Cebu City to prevent gatherings while residents celebrate the feast of the Señor Sto. Niño. | EOC Photo

Uniformed personnel with long arms also roamed streets in these areas to make sure that residents stay at home.

Personnel of the Armed Forces of the Philippines (AFP) Central Command (Centcom) are tasked to prohibit Cebuanos who will be celebrating the feast of the Señor Sto. Niño this Saturday and Sunday from gathering, said Councilor Joel Garganera, the deputy chief implementor of the city’s Emergency Operations Center (EOC).

EOC has sought help from Centcom to especially secure Barangays Suba, Pasil, Ermita, and Sawang Calero ahead of the fiesta Señor celebration on Sunday.

As a tradition, residents in these areas would converge to hold their own Sinulog activities to celebrate the annual feast of the Holy Child.

Residents of Barangay Pasil, for example, is known for showering water to devotees, a practice that they have been doing for years.

Garganera said military personnel will stay in these barangays until Sunday to control the crowd.

“We sent Centcom tanks to Barangays Pasil, Sawang Calero, Suba and Ermita in anticipation of the crowd in tomorrow’s fiesta celebrations,” he said.

Garganers aid the village chiefs of the four barangays have also been warned against allowing fiesta celebration otherwise they will have to face administrative charges for violating quarantine protocols.

While they monitor downtown barangays, Garganera said that the EOC has also intensified its monitoring of private and public gatherings in celebration of this year’s Sinulog.

Oplan Bulabog was implemented in the city starting at dawn on Saturday.

Garganera said these measures are meant to prevent any further rise in cases of the coronavirus disease during the fiesta Señor celebration.

EOC is asking Cebuanos to stay at home during the weekend to avoid the risk of infection.  They can join Basilica Masses that are streamed online and watch the canned presentation of previous Sinulog winners prepared by the Sinulog Foundation Inc.

Just like the Basilica, Garganera said it is also best for parishes in the city to refrain from organizing fiesta activities that could risk the safety of Cebuanos. / dcb