Sto. Nino and the religiosity of Filipino seafarers 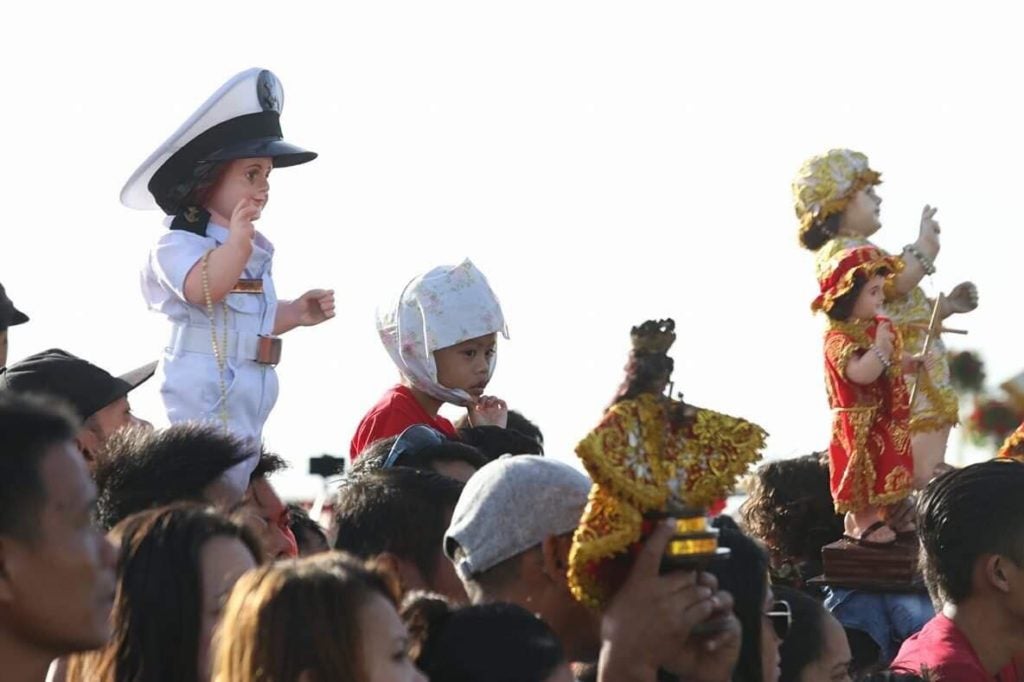 Devotees hold aloft their images of the Sto. Niño, one of them dressed as a seafarer, and their children as they wait for the arrival of the vessel carrying the Sto. Niño image from the sea procession in this January 2019 photo.| CDN file photo (Junjie Mendoza)

The Sto. Niño is venerated all over the country with annual festivals celebrated every last two weekends of January through special masses, dances and processions attracting millions of devotees and tourists.

The main religious festivals in honor of the child Jesus are Ati-Atihan  of Kalibo, Aklan, Sinulog of Cebu,   Dinagyang of Iloilo and Dinagsa of Cadiz City.

Even if the statue is  a diminutive figure, Jesus is depicted as a small king with royal regalia: crown, red cloak of intricate embroidery, with its left hand holding a cross-bearing orb (a symbol of Christian authority), while its other hand is in a priestly blessing gesture.

However, Filipinos downsized the merrymaking atmosphere this year due to COVID19.

In the street dancing event of Ati-Atihan called Sadsad, the Sto. Ninos are  normally  dressed based on the group’s interest.

I usually see some wearing a seafarer’s uniform, presumably owned by a family whose member is in the maritime profession. This is a reflection of the practice of most Filipino seafarers of bringing with them on board the vessel their religious beliefs, ideas and tradition.

They normally maintain a renewed faith practice and religiosity each time they go home.

The Philippines is considered as one of the major supplier of maritime labor globally as it is estimated that there is one Filipino seafarer for every five crew members  on board a vessel at any time.

Religion offers for the ordinary Filipino seafarers strength, hope and peace in relation with their daily work and social relationships on board the vessel.

A study by the Seafarers International Research Center (SIRC) revealed how religious practice may serve to mitigate negative aspects of work such as loneliness, isolation, and institutional living,  as well as fear of  the dangers that can be encountered at sea.

Despite its glorification due to economic returns, a job of a seafarer is not exactly a walk in the park.

The maritime  profession has always been identified as a high-risk workplace replete with health and safety hazards in relation to the risks of accidents, illnesses and mortality.

The seafarer is often mentally, physically and emotionally stressed, aside from being constantly exposed to a variable environment while working on board vessels that cross ocean boundaries.

Some seafarers described faith as helpful in overcoming difficult emotional shipboard conditions and in making life at sea  bearable in many ways.

SIRC noted that seafarers find strength in their God as they commonly experience fear for his life during emergencies at sea often associated with storms, mechanical failure, collisions and groundings.

SIRC stressed that God was being drawn upon by seafarers to increase their resilience in dealing with stressful and dangerous workplace situations.

Seafarers are more likely to draw on their belief in a God to help them at times when they are powerless to help themselves, SIRC said.

During the interviews of the Ten Outstanding Maritime Students of the Philippines (TOMSP), I asked some of them what personal item will they bring with them if the boat is in danger of sinking and most of them answered the rosary.

Their answer is a reflection of what SIRC noted as the practice of carrying something with totemic significance or religious artifact that will comfort them as protection like rosary, bible as well as other religious  pamphlets and written materials. They find great solace in their  belief in God.

Archbishop of Manila Luis Antonio Tagle said in one of the National Seafarers’ Day celebration that Filipino seafarers are ‘saint potentials’ .

Referring to Saint Lorenzo Ruiz and San Pedro Calungsod, Tagle noted that they were seafarers and missionaries at the same time before they became saints who sailed to other countries and died for a mission: “to teach the Good News.”

Tagle underscored that the pain brought by separation is a sign of the seafarer’s  love, strength, and faith for the good of his  family and the country.

“Even if you feel pain when you leave your family and your country, that suffering is not a reason for you to be ‘paralyzed,’ but inspire you to strive for more,” said Tagle, adding that their hardships will not weaken them but make them even stronger.

Read Next
Duterte to firms: No franchise until you settle your accounts with gov’t