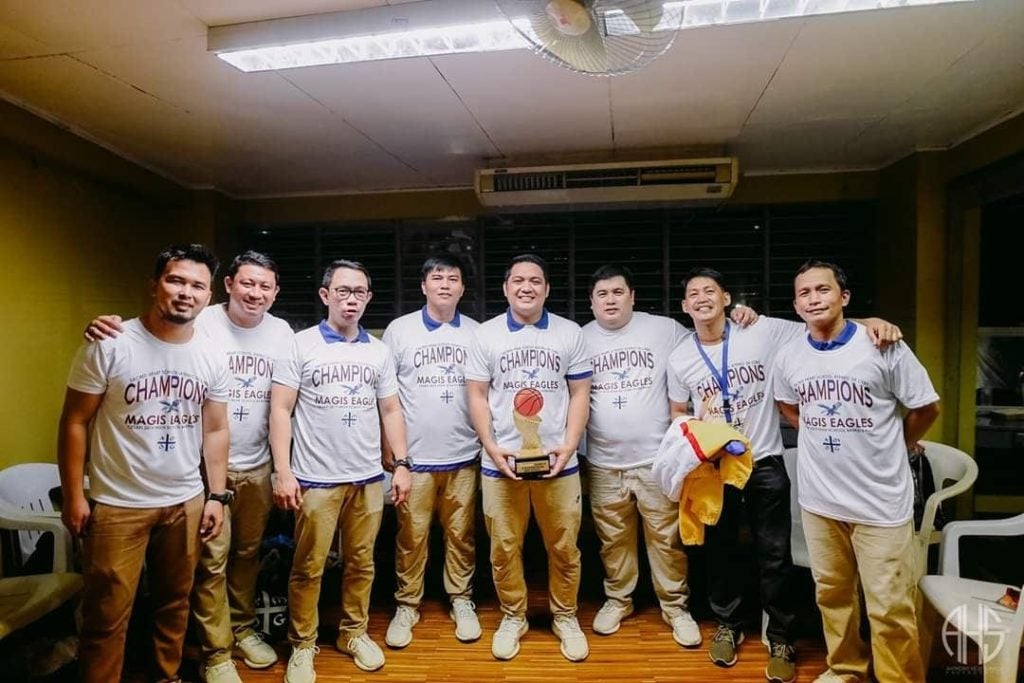 Seen in this contributed photo is Francis Auquico (fourth from left) and Rommel Rasmo (third from right) of the champion SHS-AdC-Magis Eagles team.

Rommel Rasmo, who was initially named the team’s head coach, appointed Francis Auquico to be the new bench tactician of the team.

“Coach Rommel (Rasmo) appointed me as ARQ Builders’ new head coach because he needs to supervise the Magis Eagles basketball program here in Cebu,” Auquico told CDN Digital. “Our basketball program’s fresh recruits are housed and currently having their online study at the old Sacred Heart campus. They really need close supervision, that is why Coach Rommel decided not to join ARQ Builders in the upcoming tournament.”

Auquico said he is ready to take on the challenge to coach a professional basketball team for the first time in his career.

“Coach Rommel gave me this opportunity because he trusts me. So I need to prove everyone that I can take on the challenge of handling a professional team for the first time,” said Auquico. “There are a lot of challenges for me in this tournament and the pressure is starting to mount already. But with the help of my assistant coaches, we can do this.”

Auquico is confident of his team winning the Visayas Leg tournament that features five other professional basketball teams. They will be playing in a bubble setup due to the COVID-19 pandemic.

Auquico’s concern is his team’s mental preparedness as they will get separated from their families for roughly a month inside a bubble environment.

“I think we have a fighting chance to win the title, but it is not an overnight achievement. We need to work hard because we are not the top team of this tournament. We will do our best to achieve our goal of becoming the champion,” said Auquico. “Our main concern is the mental preparedness of the players. They will not see their family for almost a month. However, me and the rest of the coaching officials already prepared activities to keep them occupied while inside the bubble.”

“We are starting from scratch. We do not have a concrete formula yet for this team, considering some key players have not arrived yet in Cebu. We are kind of late in terms of preparation, but we can manage this. We still have time to train before we enter the bubble three weeks from now,” added Auquico.