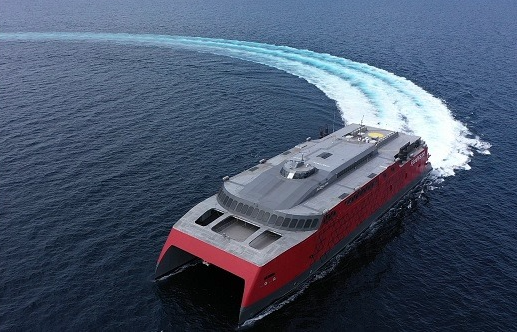 CEBU CITY, Philippines – The completion of a high-speed ferry assembled by a shipping company based in Balamban town in western Cebu marked the 75th anniversary of bilateral relations between the Philippines and Denmark.

The Department of Foreign Affairs (DFA) announced in a statement on March 12 that the Fjord FSTR, a 109-meter catamaran ferry, departed from Cebu for Denmark last March 5.

Danish shipping company Fjord Line commissioned Austal Philippines for the construction of the vessel which has the capacity to ferry 1,200 passengers and at least 400 cars, the same statement reads.

Austal Philippines is a ship-building company that is based in Balamban, a first-class municipality that borders Cebu City on the west.

“The launch of the vessel coincides with the 75th anniversary of Philippine-Denmark diplomatic relations,” DFA stated.

Upon its arrival in Denmark, the agency said that the ferry will be used to transport passengers and goods between Denmark and Norway.

Philippine Ambassador to Denmark Leo Herrera-Lim welcomed the milestone between the two countries.

“The delivery of the ship is a significant milestone as it is the first wholly constructed ship in the Philippines to carry passengers and cargoes in Denmark. It also reflects the vibrant relations between our two countries,” Herrera-Lim said.