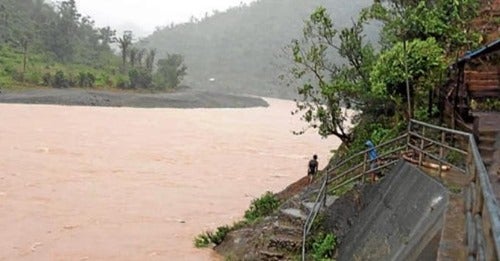 SWOLLEN At least seven villages are isolated after heavy rain dumped by Typhoon “Bising” caused a river to swell and over flowonto a spillway in San Miguel, Catanduanes, on Monday. —KARLO BAGADIONG / PHILIPPINE INFORMATION AGENCY CATANDUANES

LEGAZPI CITY, Albay, Philippines — Floods and landslides caused by moderate to heavy rain dumped by Typhoon “Bising” (international name Surigae), which affected Bicol region over the weekend and Monday, forced 39,341 families or 137,532 people to leave their homes, the Office of Civil Defense (OCD) said on Tuesday.

The evacuees were from areas prone to floods, landslides, mudflows and storm surges.

The bodies of two people who were believed to have drowned during the onslaught of Bising were found in the spillway of Barangay Curry in Pili town in Camarines Sur on Monday morning, authorities said.

The victims were identified as Simeon Sto. Domingo, 61, and Precy Panganiban, 56. The authorities said the victims were trying to cross the spillway, which had already overflowed on Sunday afternoon due to incessant rain.

Flooding was also reported in low-lying areas in the towns of San Miguel, Panganiban, Gigmoto and Virac.

Flooding also affected the towns of Ocampo, Lagonoy, San Jose and Baao in Camarines Sur, leaving roads impassable to all types of vehicles.

The Philippine Coast Guard in Bicol reported that 959 passengers bound for Visayas and Mindanao and 324 rolling cargoes were still stranded in various ports in Bicol.

The damage caused by Bising to agriculture was initially estimated to amount to P45.93 million as of Tuesday afternoon, the Department of Agriculture said.

The typhoon also destroyed 1,600 hectares of rice, corn and high-value crops, as well as livestock and poultry farms.

Over 3,000 metric tons of produce were lost, affecting 765 farmers.

Bising is expected to leave the Philippine area of responsibility on Sunday after lashing the eastern portion of the country with heavy rain and strong winds.

Bising continues to move north-northwest direction on Tuesday, with its eye still in the Philippine Sea, east of the archipelago, according to the Philippine Atmospheric, Geophysical and Astronomical Services Administration. —With reports from Karl R. Ocampo and Jhesset O. Enano