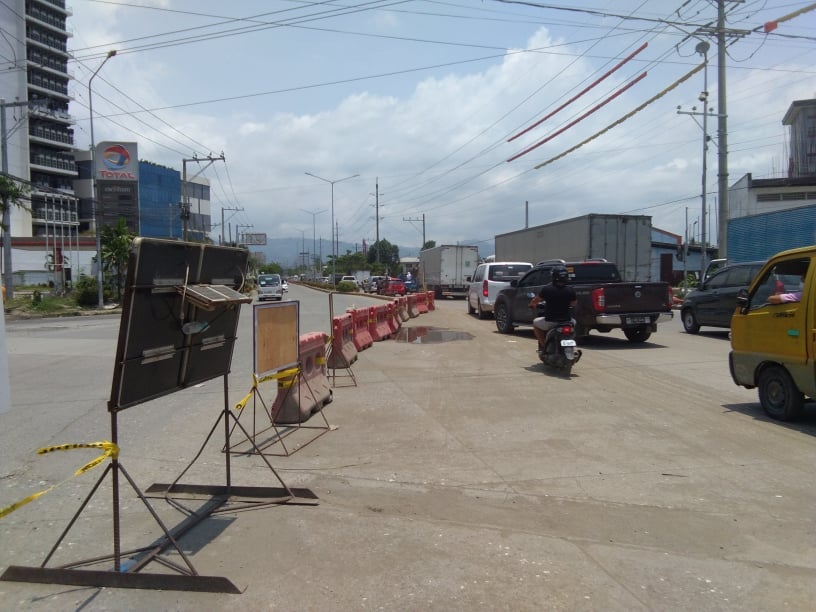 Motorists are encouraged to be patient while passing along UN Avenue in Mandaue City because of the ongoing infrastructure project there. | Mary Rose Sagarino

MANDAUE CITY, Philippines — Motorists passing along United Nations Avenue in Mandaue City are encouraged to be more patient especially with the new traffic scheme being implemented starting today to help ease congestion in the area due to the ongoing overpass and underpass project of the Department of Public Works and Highways.

Be more patient because once the infrastructure project would be done it would be a big help to ease traffic in the area and even in nearby streets, said City Councilor Jimmy Lumapas, Committee on Transportation chairman, in an interview.

Edwin Jumao-as, Traffic Enforcement Agency of Mandaue (TEAM) executive director, for his part, said the DPWH project would be expected to be completed in 2024 yet.

And so to ease traffic in the area due to the project, the TEAM is implementing a new traffic scheme today (Monday, April 26).

Under the new traffic scheme, vehicles coming from D.M. Cortes Street can no longer go straight to the Cansaga Bridge or make a left turn to U.N. Avenue.

Drivers were now directed to make a right turn to UN Avenue and make a u-turn underneath the Marcelo Fernan Bridge going to the Cansaga bridge.

Vehicles coming from Cansaga will no longer be able to cross directly to D.M Cortes Street or at the P. Burgos Street. They’ll make a u-turn going to D.M Cortes.

For trucks or bigger vehicles will travel directly going to Pacific Mall.

While vehicles coming from Lapu-Lapu can make a u-turn near shell station going to D.M Street or P. Burgos Street and for trucks they will travel going to Pacific Mall.

Jumao-as said traffic in the area is now manageable compared to last Friday, the first day of dry run of the new traffic scheme.

There were still motorists and biker who were confused and surprised of the new scheme.

Nikko Armad and RJ Pachito both were going to Consolacion were confused why they can’t make a left turn and instead make a u-turn underneath the bridge.

The TEAM has also already deployed additional four traffic enforcers in the area to guide the drivers where to go.

There are now seven traffic enforcers manning the flow of traffic.

HPG notes increase in apprehensions due to intensified operations