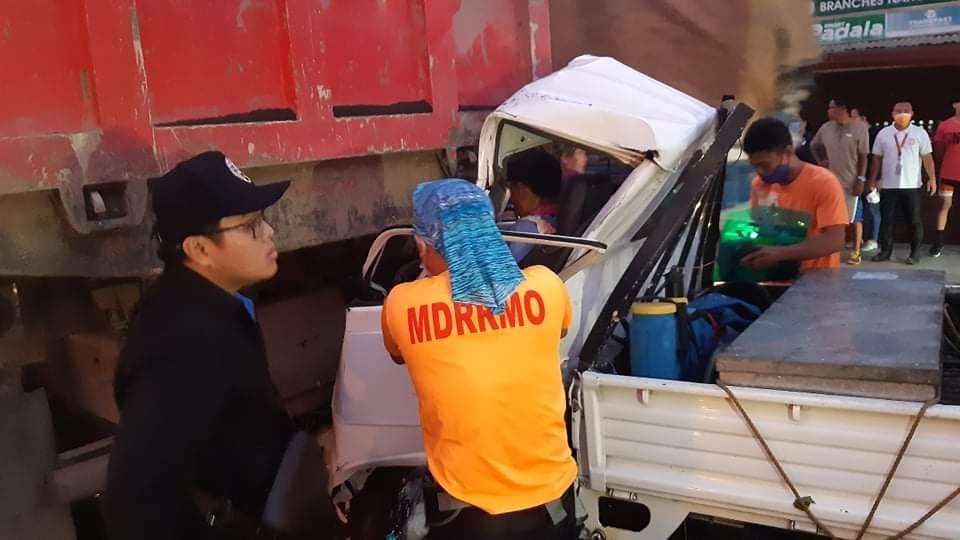 Personnel from the Municipal Disaster Risk Reduction and Management Office of Minglanilla rescue a driver who got pinned after his vehicle crashed into the rear end of a dump truck in Barangay Lipata in Minglanilla town, southern Cebu on Friday morning, April 30, 2021. | via Paul Lauro

CEBU CITY, Philippines—A driver of a pickup-type mini truck was hurt after he got pinned in his vehicle following an accident along the national highway in Barangay Lipata in Minglanilla town, southern Cebu early Friday morning, April 30, 2021.

Police Senior Master Sergeant Dante Balinte, the traffic investigator on this case, identified the injured driver as Cristiano Hilaca, who is from the southern Cebu town of Argao.

Police Staff Sergeant John Cyrus Illustrisimo, the desk officer of the Minglanilla Police Station, said they received the alarm of this vehicular accident from a concerned citizen at 5:10 a.m. on Friday.

Based on initial investigation, Hilaca was following a dump truck  driven by Renly Apurado, who is from Campo 4 in Talisay City, along the national highway.

The truck suddenly stopped, and Hilaca wasn’t able to stop on time, causing him to crash into the rear end of the dump truck.

According to the driver of the dump truck, he had to hit the brakes fast after a motorcycle driver in front of him stopped to pick up something on the road. Investigators have yet to identify the motorcycle driver and the object he was picking up.

Personnel from the Municipal Disaster Risk Reduction and Management Office of Minglanilla were quick to come to the rescue the driver.  They brought him to the Minglanilla Hospital for treatment from the wounds he sustained from the accident.

Read: Brake failure possible cause of road accident in Guadalupe