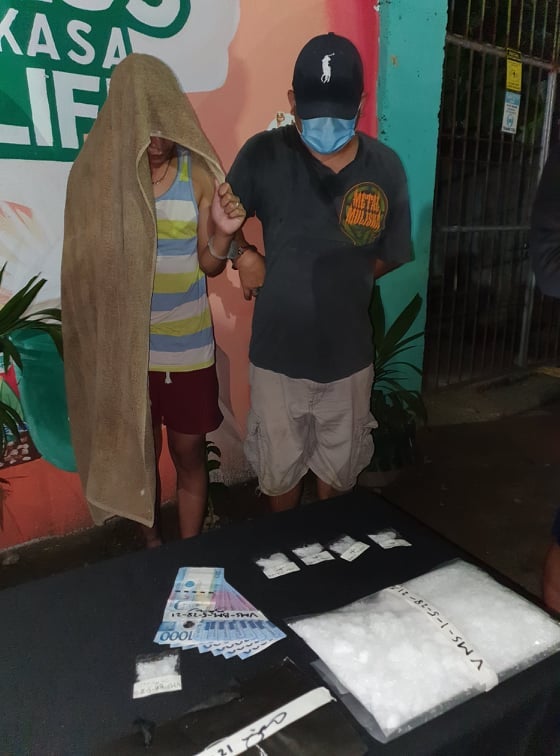 Two high-value individuals engaged with illegal drug activities were arrested with around a P7million worth of ‘shabu’ past 11 p.m. on Friday, May 28, in Barangay Luz, Cebu City. | Photo from CCPO-CIU

CEBU CITY, Philippines — A mechanic and a construction worker were arrested with nearly P7 million worth of suspected ‘shabu’ during a buy-bust operation at around 11:30 p.m. on Friday, May 28, at Cabantan Street in Barangay Luz, Cebu City.

Caballes said that the suspected shabu taken from the suspects had a Dangerous Drugs Board value of P6,970,000.

He also described the two suspects as high value targets who could dispose from 100 grams to a kilo of shabu in a week.

Police Colonel Josefino Ligan, CCPO chief, said that the market for the two suspects’ illegal trade covered the whole of Cebu City especially the barangays where the two resided.

Ligan also said that Suplac’s source of transactions or where to get the supply of illegal drugs was allegedly an inmate inside the Cebu City Jail.

The CCPO chief also said that sometimes Ambray would contact the inmate directly for his supply of illegal drugs.

Ligan also said that with at least 6,000 inmates at the Cebu City Jail, it was still possible to slip in a cellphone inside the jail cells, which inmates could use to communicate outside.

Cebu City Jail warden, Superintendent Jose Abueva, for his part, said that the CCPO had already coordinated with them and informed their office about this Person Deprived with Liberty (PDL’s) involvement in this illegal drug transaction.

He said that action had been taken and the inmate was already separated and placed in a segregation cell.

Abueva said the PDL was also placed under the disciplinary board.

He said that since he assumed as the Cebu City Jail warden, he had received reports about PDLs being allegedly involved in illegal drug transactions.

Abueva said that to address this, they would conduct surprise inspections in the jail cells or greyhound operations to find and confiscate contrabands inside the jail cells.

Read Next
‘The Bomb’ Araneta shakes off S. Africa loss, gears up for ‘Kumbati 10’ fight