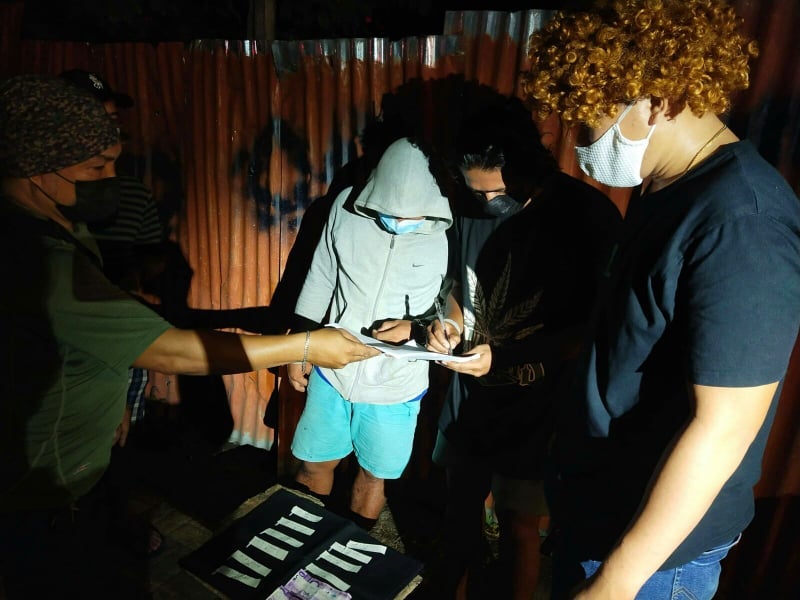 Reported “missing cousins”, Rhyjy Blanco Naingue, 24, and Leoneree Blanco Evangelista, 25, (2nd and 3rd from left respectively) were arrested during a buy-bust operation on May 20 in Banawa, Barangay Guadalupe, Cebu City.| Photo from CCPO-CIU

CEBU CITY, Philippines — Two cousins, whose families reported as missing on a Facebook post on May 19, were caught with P20,000 worth of suspected shabu during a buy-bust operation in Banawa, Barangay Guadalupe, Cebu City on May 20.

Rhyjy Blanco Naingue, 24, and Leoneree Blanco Evangelista, 25, who are both from Barangay Tejero, Cebu City, were described by police as suspected drug couriers whom they [police] had monitored for at least a month, said Police Lieutenant Colonel Wilbert Parilla, deputy city director for operations of the Cebu City Police Office (CCPO).

Parilla said he did not know that they were reported missing because they had been monitored for their illegal activities for at least a month already.

Parilla was referring to reports that members of the suspects’ families posted on Facebook on May 19 missing posters of the two cousins.

The family said that they were last seen in the Mandaue area on May 18.

The posts were later deleted.

Parilla said that their investigation showed that both cousins were suspected drug couriers, whose task was to bridge the transactions of illegal drug trading of the drug dealers and their customers.

He said that drug dealers now were innovating their system of transacting by employing more drug couriers, who are the persons they would pay to deliver and get payment from the customers.

(If the drug dealer operates alone then he would also be the one to get the payment. If he would be arrested, then his loss would be double.)

Parilla said on the case of the arrested cousins, they caught them with at least 3 grams of suspected shabu with an estimated Dangerous Drugs Board value of P20,400.

The cousins were detained at the CCPO detention cell pending the filing of charges.

Aside from describing them as drug couriers, Parilla also said that they also classified the two cousins as only street-level illegal drug peddlers.